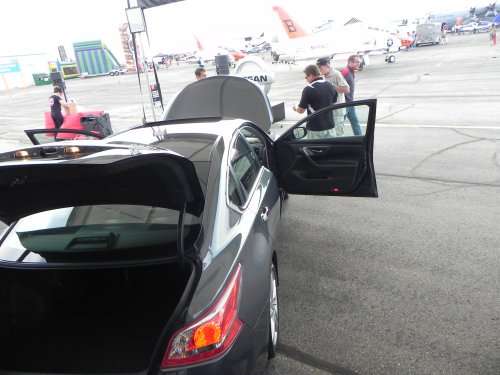 Torque News' own Don Bain and Aaron Turpen attended the Nissan NEXT traveling infocenter when it arrived at the Rocky Mountain Air Show near Denver, Colorado this weekend. Find out where to be NEXT and get hands-on test driving NIssan's newest cars in a no-pressure, fun and informative environment.
Advertisement

The Nissan NEXT event is a traveling information center showing people the latest lineup of models from Nissan's bevvy of automobiles. The event is crossing the country westward, hitting local events, and stopped at the Rocky Mountain Air Show near Denver, Colorado this weekend.

Both Don Bain and myself were there and we teamed up to get the latest information from Nissan's reps that were on hand as well as to put our hands on the steering wheels of some of the company's most exciting new rides. The flagship of the show and Nissan's new lineup is the all-new 2013 Altima, featuring the first-ever zero-gravity seating system that has to be experienced to be believed. Also on hand were the all-electric Nissan Leaf (in red!), the massive and aptly-named Titan pickup, the Maxima with its amazing full-length sunroof, the agile Frontier pickup, the versatile Pathfinder, and many more.

From Colorado, the Nissan NEXT showcase is moving westward, with show dates in California, Oregon, and Washington. A full schedule and link to the NEXT website are below.

NEXT from our perspective
With both of us Torque News contributors there, it was easy to get plenty of photos and pump multiple Nissan representatives for as much information as we could get. Don, seen in the photo at right grilling the Altima expert on-hand for intel, will be forthcoming with full details on individual cars.

For visitors to the Nissan NEXT tent, the first step is to sign in with your driver's license and give them any information you'd like local dealers to have for follow-up (totally optional). From the get-go, you can see that this is a no-pressure situation as friendly red-shirted people show you to the computer, scan your driver's license (if you want to test drive), and show you how to enter to win your own 2013 Altima free of charge (Nissan will even pay the tax, title, and registration fees). If you enter to win, however, you must test drive the new Altima too. What's the point of getting a new car if you don't already love it? Right? After registration, you receive a wristband that has an RFID chip in it so that the rest of the NEXT experience is tailored to you.

Next, you enter the big tent where one of four big screens let you Minority Report your way through the model lineup of Nissan's offerings, pointing and sliding your fingers around the screen to get full 360-degree views of the cars, request more information be mailed or emailed to you, and get very familiar with NIssan's offerings.

When you're finished looking through what's there, you exit the tent to the test drive lot. More computers await and you can choose from available models on the screen and tell the computer which you want to drive first. A rep will take you to the car and a friendly iPad presentation will accompany you both showing you the test drive route and giving you information about the vehicle you're piloting.

Best of all? You can test drive all the cars you want as many times as you'd like. No pressure, no worries. I recommend getting there early and driving all of them at least once. Try the innovative Leaf in at least two colors (I'm partial to the red one) and definitely climb your way up into the Titan (bring your climbing shoes, it's HUGE) and feel the raw power of that massive machine.

Welcome to Our World
Of course, not everything always goes to plan. Don and I decided to both take out the 2013 Altima as this is a car that neither of us had driven before. Don picked the red one and our friendly rep, who we'll call "Bobbi" as she wasn't sure she wanted her real name used, accompanied, iPad in hand. The car, being as advanced as it is, sensed that we were not interested in rules and pre-mapped routes, so it instructed the iPad to bugger off. The iPad, being the latest high-IQ gadget from Apple, obliged and refused to perform any of its tricks for Bobbi.

So I piloted the car to where I thought it should go. Bobbi radioed in to say we were off-track and things were OK. So we glided in the zero gravity seats around the outskirts of Broomfield, Colorado and its airfield. Don drove us back, since he'd been paying attention and knew how to get to the airfield again.

From there on, every vehicle we drove magically didn't go on the test drive route. Don't try this at home, folks, we had the excuse of press credentials and a camera for photo taking.

The Vehicles
Between us, Don and I drove about half the vehicles on hand before we ran out of sunlight for photography. The Altima was followed by the Maxima, a truly impressive luxury car with every trimming you can imagine. A sunshade on the back window keeps it cool, the plush seating is topped by the most amazing suede-like fabric you've ever witnessed, and the double-sunroof that opens up nearly the entire top of the car to the sky is beyond awesome.

After the Altima came the Frontier, a great and powerfully agile little pickup truck with good handling and a lot of utilitarian conveniences that experienced truck owners will appreciate. For all of its off-road and cargo hauling capabilities, though, the Frontier is a smooth road ride as well.

Next was the battery electric Leaf. The tour has two of them on hand, one of which is in red. Of course, we all know that red goes faster, so that was the one for me. Any chance to drive this car is a good one, so take it. It's a capable compact car on its own, but being purpose-built as an electric and showing you it's so with its unusual shifter, the Leaf is an experience you have to try.

Then came the, in many ways, polar opposite of the Leaf, the Titan. This behemoth is something only a true truck lover can appreciate. Don, who is not used to large vehicles so high off the ground, had a blast driving the Titan. Being a former truck driver, most of my appreciation lay in the massive tires, strong engine pull, and comfortable quad-cab interior. Truly a great ride, but bring your mountaineering gear because even Big Foot needs a boost climbing up into this beast.

Also on hand, but not driven, were the Pathfinder SUV, the huge Armada SUV, the fun Juke crossover, the racy Z, and more. Car lineups will vary from stop-to-stop as the only vehicles traveling with the NEXT group are the 2013 Altima and the Leaf electric, the rest are supplied by local dealerships at each location.

You can find out where NEXT will be, well, next by going to NissanNext.com. From Colorado, the troupe will be headed west to Anaheim and then Valencia to the Orange County Auto Show and Six Flags park (respectively). Then the Los Cerritos Center in Cerritos, and then north to Sacramento at the Capital Air Show. The last two stops will be at the Oregon State Fair in Salem and the Puyallup Fair in Puyallup, Washington.

Again, if you get the chance, this is a great opportunity to test drive and learn about Nissan's lineup of great vehicles without any sales pressure.

Don Bain wrote on August 26, 2012 - 5:48pm Permalink
Personally I can't wait to see a 2013 model of the Nissan Maxima. This model has been a comfortable yet sporty performer from the get go and is still a winning combination. Going out on a limb, I'd say this ride (at about $40K) compares well to a Lexus IS.