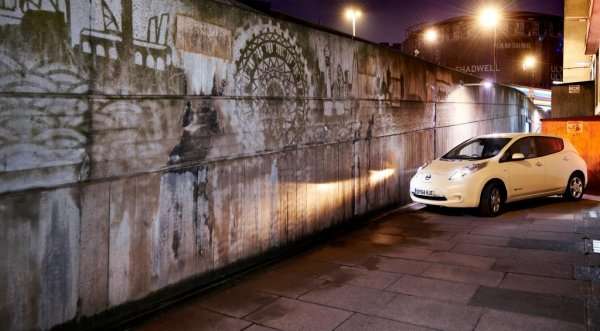 A Nissan LEAF is powering a "reverse graffiti" artist in London, creating street art out of street grime.
Advertisement

Many people in London are helping to clear the air of the city by driving all-electric cars like the best-selling Nissan LEAF. As the number one selling electric car in the world, the LEAF can certainly help with that. Now, an artist is using the LEAF to create "Reverse Graffiti," which removes dirt and grime with art.

In this case, Moose, the man who says he invented the Reverse Graffiti idea, unveiled a mass-scale mural of the London skyline with hints at the plug-in future its transportation holds. The mural is a striking scene of familiar buildings interwoven with the promise of a cleaner, brighter future.

The art is created by using a power washer and wire brush to selectively clean off dirt and grime, much of it laid on by passing motor vehicles and their exhausts.What's left behind are clean surfaces and dirty areas that create a mural of art.

The artwork – which is on show in the subway on Station’s Approach, Waterloo – includes a host of London’s most famous landmarks: Buckingham Palace, The Shard, Battersea Power Station and The London Eye, to name just a few. Produced to highlight the growing issue of poor air quality across Europe’s biggest cities, it aims to showcase how much cleaner they could be if more people adopted electric vehicles.

So what does the Nissan LEAF have to do with it? Well, to create the mural, Moose used a Nissan LEAF and a LEAF to Home equipment package to power the washer. The LEAF to Home package is a portable device that allows the car's battery to power other things, including an entire home if need be. A fully-charged LEAF can provide power to a home that has none for up to two days.

The entire mural is 2.5 meters high and 10 meters wide. "I've been using reverse graffiti for fifteen years now, in fact I named it. My whole ethos is about highlighting the amount of pollution we endure daily using a very positive harmless method that never fails to ask questions about what we accept and what we shouldn't accept in our environment. For these reasons I was keen to be involved in this project,” explained Moose, who originates from Leeds.