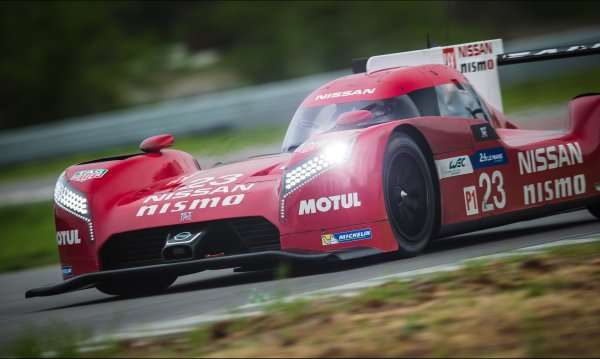 Nissan has tested the LM P1 in the United States for the first time and their entry car, the GT-R LM NISMO, has completed its four-day test in Kentucky as drivers preparing for the big race did endurance testing on the car before June.
Advertisement

Nissan's race team chose the NCM Motorsports Park track in Bowling Green, Kentucky because it has several elements that mimic the circuit for the 24 Hours of Le Mans, known as the "world's toughest race." Driven by Henry Tincknell, Michael Krumm, Max Chilton, Marc Gene, Jan Mardenborough, and Alex Buncombe, the GT-R LM NISMO was put through its paces on the track for four days.

"This circuit was a great find, as we now have a very good idea how the GT-R will perform through Mulsanne Corner and the PlayStation chicane," said NISMO's Darren Cock about the Kentucky venue. "This track also has its own version of the Porsche Curves – in curvature but not in topography – so it is the ideal place for us to test."

Although the configuration was excellent, the weather was not. Hard rain was present for nearly all four days, but the team says that this gave them a chance to test their "wets" (wet-weather tires) and the bespoke Michelin's made especially for the GT-R LM NISMO. "We have had the car running smoothly and are still learning masses every day. We have learned a lot about the Michelin ‘wets,' especially our bespoke designed rear tire, so it has been very useful," said Tincknell.

The purpose of the run was to familiarize the drivers with the car, put miles on the car itself to work out any kinks, and pit it against the Nissan LM P2 car, Nissan's other race entry. "Our focus was on optimizing the suspension set up and refining elements like traction control," said Team Principal Ben Bowlby. "We've gone from trying to make the car go around a race track to getting the car ready to race. We had some issues with the drainage of the track. Because of the river issue we were having to run the wet tires a long way into what would have normally been classed as dry running. Interestingly, we could stay on the wets for a long time in drying conditions, so that gives us a lot of confidence."

The new NIssan LM P1 team is confident in their car and have added another 1,200 miles to it over the four days in Kentucky. The car is heading towards homologation for Le Mans, which will complete at the end of the month. Two more days of running after that, also here in the U.S., will finish the American side of the preparation process for the car before it heads to Europe.

Tesla Contemplates A New Strategy for China Retail even As Sales Boom
Jay Leno on Elon Musk & EVs: “I Think He Should Get ... Credit"
END_OF_DOCUMENT_TOKEN_TO_BE_REPLACED