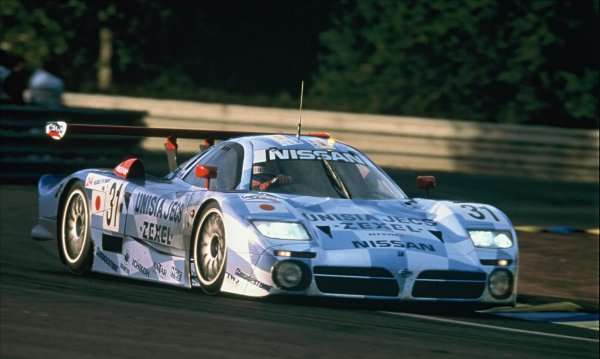 While the focus on Nissan's participation in Le Mans has been on the ZEOD RC, the 2015 FIA WEC will feature a Nissan GT-R as the company's first factory LM P1 team in over a decade.
Advertisement

In 1998, Nissan fielded an LM P1 car in the FIA World Endurance Championship for the last time as a factory-sponsored team (pictured above). Since then, their NISMO division has supplied parts and cars, but has not entered its own team into what may be the world's most competitive endurance racing circuit.

Now, they're back. And Godzilla will be unleashed on Le Mans in 2015.

That's what was announced at an event in London Friday as Nissan and NISMO executives came together to tell the world. Outside the event, held in East London, a big crate sat, intermittently giving breath-like engine sounds to emphasize the power to be unleashed and remind those attending - without saying it outright - that Nissan's GT-R is the Godzilla. This tied into the announcement coming from inside the Old Truman Brewery where the event was held.

The new Nissan NISMO race car for Le Mans will be.. a GT-R. Or at least GT-R-derived. It will obviously look a lot like a Le Mans car, though Nissan kept the actual race car (if it exists already) under wraps.

Officially, the car is the Nissan GT-R LM NISMO and it will likely feature design elements that hint at the Godzilla itself, but with aerodynamics fitting the rules and requirements of FIA's WEC.

Although the car itself was not unveiled, hints as to what it will be were given.

"LM P1 is not just an arms race," said Palmer. "All our rivals in the class have taken different technical approaches, and we will be doing the same. We want to win in a very different way to that of our rivals. We won't be turning up in a vehicle, which is a basically another hybrid that looks like another Porsche, Audi or Toyota – they all look the same to me. Our intention is to do something that is a little bit different."

Miyatani then says that the design and build of the Nissan GT-R LM NISMO is a global project with DNA firmly rooted in Japan. The team is made up of engineers and technical crew from Europe, Japan, and the U.S.

"We have chosen to take the GT-R name to Le Mans as the GT-R symbolizes the ultimate in Nissan's performance," Miyatani finished.

Nissan has promised to unveil the car, its drivers, and more in the coming months leading into the 2015 Le Mans season.