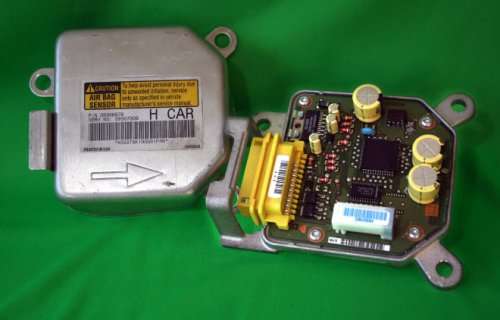 The NHTSA has announced that new federal standards for in-vehicle event data recorders (aka "black boxes") will take effect on September 1, a year before automakers were expecting them. How will this affect you?
Advertisement

Automakers had hoped that the National Highway Traffic Safety Administration (NHTSA) would wait another year before issuing standards requirements for automotive "black boxes" - devices which record information in a revolving fashion and shut off recording in an accident.

The boxes are meant to allow police and insurance to find out what happened immediately before and during an accident. The devices record things like vehicle speed, engine and electronics systems information, etc. This information can be recovered after an accident in order to get an idea of what was happening in the vehicle and whether or not driver or systems errors could have contributed to the accident.

The NHTSA requirements do not require that EDRs be included in cars; they will remain voluntary. Currently, very few cars employ an EDR and often, they are added after-market as an insurance incentive.

Although the mandate for them is not in place, the NHTSA is thought to be considering it and could implement a requirement as early as this year, affecting model years 2014 onward. Politically, this issue has been a hot-button in the past and, frankly, is not likely to be taken up in an election year.

The first standards for automotive black boxes were proposed in 2006 and received heavy argument from industry groups. In 2009, the Alliance of Automobile Manufacturers, one of the nation's largest automotive representative groups, asked that standards issuance be delayed until 2013 to give auto companies more time to work with original equipment manufacturers (OEMs) to meet the then-proposed standards. The NHTSA was expected to grant this, but has now made it clear that they had no plans to do so.

The petitioner suggested that the delay would enable vehicle manufacturers to retain current EDR functionality across all vehicle models and avoid disabling legacy EDR systems for a limited number of vehicle models," NHTSA said in its Tuesday decision. "The agency is denying the petition since the implementation of the August 2006 final rule has already been delayed by two years and we have recently published a final rule responding to the remaining petitions for reconsideration."

Privacy concerns have kept the black boxes out of cars, with exception for the rare volunteer, until now. The issue is not simple nor is it straight forward and there is little evidence that installing EDRs in cars would make them safer or reduce litigation surrounding accidents. Since much of the nation has adopted "no fault" accident policies and laws in an effort to remove police from all but criminal investigations of auto accidents, the addition of black boxes to the mix would likely only confuse things and could increase civil suits and potential insurance claims issues.