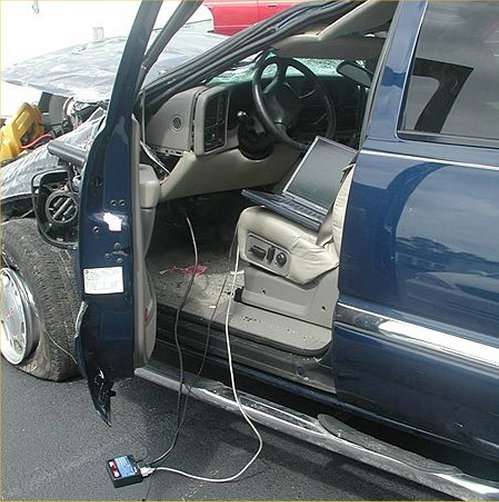 With passage of Senate Bill 1813 (aka Map-21) and its likely passage through the House, automakers will be required to install EDRs into cars starting in 2015.
Advertisement

Event data recorders (EDRs) are the so-called "black boxes" installed in vehicles to record data that can be recovered after an accident and used to recreate the incident in a way similar to the recorders used on aircraft. The United States Congress is very close to mandating these devices be in every vehicle sold in America by 2015.

Senate Bill 1813, known as "Map-21," mandates that automakers include an EDR with every vehicle made in 2015 and beyond. It passed through the Senate and is expected to see little resistance in the House before going to the White House for a signature. While the National Highway Transportation Safety Administration (NHTSA) has studied EDRs, it has been reluctant to require them for fear of public backlash over privacy questions. This does not seem to have daunted Congress.

Many auto manufacturers already use these recorders to perform diagnostics and identify malfunctions and the boxes were, in fact, instrumental in clearing Toyota during its "unintended acceleration" scandal of 2009. General Motors uses them as part of its OnStar system to alert emergency response services after a crash in order to give an idea of the severity of the wreck.

Map-21 standardizes the events recorded and then requires they be installed on all vehicles manufactured for sale in 2015 and beyond. Opponents argue that the boxes could lead to other problems, such as police using the data to incriminate people or insurance companies requiring their clients hand over the data in order to continue coverage. It's feared that while court order would be required, this would quickly become de facto.

Although the boxes record data on a specific events, they do not record what was happening outside of their purview. They cannot know other aspects of the incident such as weather conditions, distractions for the driver (inside or outside of the vehicle), etc. Insurers could also use the data to deny claims based on any number of reasons. These and other privacy concerns are being raised by groups around the nation.

Currently, some insurance companies like Progressive and State Farm, allow their clients to voluntarily install similar devices in their vehicles to track their driving and potentially reduce their premiums if their behavior is indicative of safe driving habits.

Proponents of the EDR mandate say that it will make roads safer overall and lessen litigation as incidents become more clear thanks to the data the boxes provide. Opponents point to a slippery slope where the boxes could quickly become yet another way for law enforcement and insurers to spy on drivers.