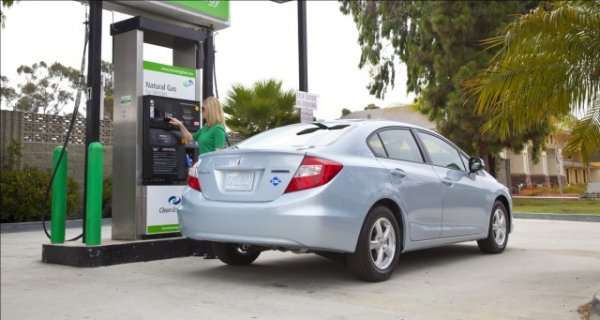 A chemistry professor in Utah has discovered a new method of transforming methane (natural gas) into liquid fuel. The process could revolutionize the fuel infrastructure as we now know it.
Advertisement

Professor Daniel Ess of Brigham Young University in Utah has developed a novel solution that could revolutionize natural gas as an industrial and transportation fuel source. The method significantly reduces the amount of energy required to make the gas to liquid conversion and cuts out a key step in the process.

Ess teamed with the Scripps Research Institute as part of a broader effort under the U.S. Department of Energy program to explore natural gas to liquid alcohol methods. Ess' research is considered pivotal and may have changed the game. It was published in Science magazine last week.

The current process, used most often in places like Qatar where natural gas is easy to extract and plentiful, requires superheating the gas and then breaking it into its constituent molecules, reforming them into a liquid alcohol that can then be used to make fuel for combustion engines.

The process Ess and his team discovered allows the methane gas to be broken at far lower temperatures, about 356 degrees Fahrenheit, using common metals like thalllium and lead as catalyst triggers. This allows the production line to skip an expensive, high-energy step while resulting in the same fuel at the output end.

This significantly lowers the cost of the process and makes liquid alcohol from natural gas a far more viable fuel for many other markets that until now could not utilize it.

Given that the U.S. Energy Information Administration expects natural gas production in the U.S. to increase from 23t cubic feet to 33.1t by 2040 (an increase of about 44 percent), this could impact fuel making in our country in many ways. It also fundamentally changes how chemicals derived from natural gas, such as methanol, are made, which impacts many areas of manufacture, including plastics and paints. It's also a key player in biodiesel, fuel cells, etc.

Professor Ess' research could change many things related to automotive and beyond. The paper's abstract can be found at ScienceMag.org.