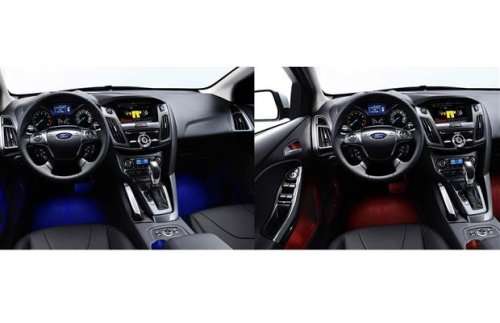 Mood lighting for your car - the next evolution in safety?

Ambient interior lighting can affect a driver's mood and be used as a safety enhancement and driver-to-driver communications tool, says one designer at Ford.
Advertisement

Tired of giving the one finger salute to other drivers to tell them how you really feel? Slap 'em with some red mood lighting then, courtesy of Mahendra Dassanayake, a technical design leader at Ford. Then throw in the hand gesture just for good measure. If you're in New York, add in horn honking and yelling curses to top it all off.

The idea behind interior mood lighting is actually much more sophisticated than that. Dassanayake says that certain levels or combinations of light (colors) can activate enzymes in the brain, triggering emotional responses that we label as "stress," "happiness," and so forth. Scientists and marketers have long known this, but it's largely been absent from vehicle design.

Until now. Dassanayake works for Ford and his team is busy studying how interior mood lighting can change the driving habits and emotional states of drivers on the road. How it can affect your chances on a first date is secondary, surely.

The idea is pretty simple. Various cues to the car can tell it how the driver's emotional state is and ambient lighting can be used to alter that state to something with less impulsive action, meaning safer driving. The default is red, which we would normally associate with anger, but which actually associates more closely with alertness. A specific shade of red is used for this, as is another specific shade of blue on the control panels, which helps drivers pick up information from them more quickly (there's a reason IBM and Microsoft have blue logos). You can see Ford's work in action in the 2013 Fusion.

So far, researchers have noted seven specific colors that can enhance safety in the vehicle. Currently, systems are set by driver choice, but Dassanayake sees a future in which mood lighting would be set by circumstance and various cues taken from the driver.

Ford isn't alone in color and light experimentation to enhance moods. Nissan and Kia have used it for accent colors and audio speaker enhancements while Range Rover uses "terrain response mood lighting" in the Evoque to denote the type of terrain and driving style the driver has chosen to use. Boeing has been experimenting with mood lighting in long-distance flights, hoping to ease the jet lag associated with crossing multiple time zones.

The effects can be more direct as well. One Ford driver says her daughter loves blue shades while her son enjoys orange or green, so she sets the colors accordingly to help them be happier on longer drives.

Hackers, of course, will have a field day with things like this. Can you imagine "first date" settings, "disco pulsing" and other options available through a smart phone near you?