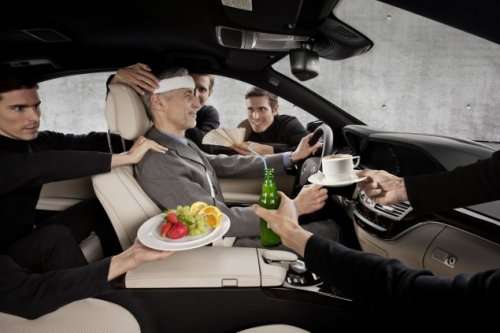 Mercedes wants you to "nap" while driving

After hiring a bunch of experts with titles like "musicologist" and "sleep researcher," Daimler is working on finding new ways to make Active Comfort a way of life in our vehicles. Which includes power naps and personal fitness coaching in the car.
Advertisement

Daimler says this is "performance-enhancing comfort." I think I heard that in a television commercial once, and it wasn't for Daimler's "ED" either.

Let's take some time so you can let that bit of brilliance sink in before we continue. Get some Kleenexes. I know. It was awesome.

Mercedes was nice enough to try to visualize it for us in a picture. Let's analyze that. At the right, you'll see said picture. Here's what is going on: the gray-haired, middle-aged, otherwise healthy driver is sitting with a smirk on his face, ostensibly driving his personal piece of German engineering. One guy is putting a wet towel on his forehead while another fans him with a dainty paper fan. Behind him, someone is holding his shoulders to keep him erect while three arms offer him refreshments as if to say "relax, buddy, all this Dysfunction is in your head." What you can't hear is the radio, which is playing a song that goes something like "Relax, don't do it, when you wanna get to it.."

The whole thing is quite nice, though the legal warning hasn't yet been announced. It will almost assuredly consist of 400 words, spoken really quickly, all of which sound like really bad things that are described as "possible side effects" and ending with "consult your doctor about whether you are healthy enough for.." Despite the fact that the guy this commercial features looks like he plays tennis every day and probably racquetball on the weekends - when he's not climbing mountains or appearing as a stand-in for a Dos Equis commercial, that is.

So.. back to Mercedes' Active Comfort. The idea is simple. A lot of unemployed people with expertise in fields that were never offered in high school Careers class, like "sleep researcher" and "musicologist" (or "Daimler experts"), needed jobs, so Mercedes obliged with a program it called TopFit Truck; which has since been expanded to the Mercedes-Benz Cars division as Active Comfort.

The research in TopFit Truck originated around the idea of extending the stamina of truck drivers so that they could show better performance. So they built a truck that is a "wellness oasis and fitness studio in one." Having been a truck driver, here's my take on it: "Health and wellness be damned, Popeye's Chicken rocks."

One of the things that Active Comfort is working on is the idea of power napping in your car. No really. They even researched the name for it in several languages. The French call it "turbosieste" which, when you say it out loud, actually sounds really cool. Even though it's French. In Japanese it sounds like some kind of dish involving uncooked fish and in German it sounds like your pants fell down. Which probably explains the whole Daimler approach here. Someone should explain to the Germans that a "Nickerchen" does not involve little blue pills. Unless you're Italian, but that's a different cultural thing there.

Of course, all of this is being done in the name of safety, since a relaxed driver is a safe driver.

Jokes aside, this approach by Mercedes-Benz has actually paid off. The company has been doing this for years and has produced some of the most comfortable driving machines on the market. And you thought it was just German engineering making better springs and cushions and performance-enhancing Internet ads for knockoff pills.