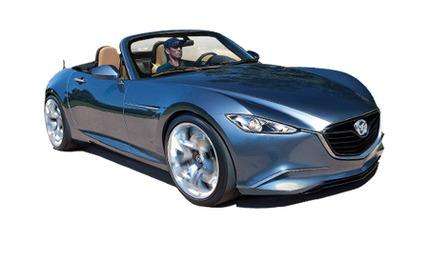 The world's best-selling roadster is about to get better, if the specifications from Mazda have anything to do with it. Expect to see a lot of improvement in the poor man's sports car.
Advertisement

Mazda has unleashed specifications for the 2014 re-do of the MX-5 Miata roadster. The tiny little sporter will see some weight loss, styling improvements, and a better engine; all without losing its rear-wheel drivetrain and working man's price point.

While Mazda hasn't released photos of the 2014 Miata to show styling, it's expected that it will follow the look of the concept shown last year - the "Kodo design language." As the photo rendering suggests, cues will be simple lines and a more robust-appearing front end. The clipped rear and rounded fast top will remain, it appears, but the nose will extend somewhat and have more stylized logo and grille work to match current Mazda trends.

The car will also be losing weight for the new release, shedding about 300 pounds to put it in the 2,200 pound range at the curb. This weight loss may translate to better handling and speed, though the diminutive sports car is lightening to the point where it may become too feathery. Weight distribution will likely remain good, though, helping to keep the Miata's feet on the ground and hold the car's enthusiastic handling.

The rear-drive will remain, as it's an extremely important part of this car's overall appeal to most drivers. Under the hood will be a 1.3-liter turbocharged 4-cylinder from the Skyactiv family of Mazda's new engine designs. Output will roughly match the current 2.0-liter four cylinder, at around 167 horsepower, but will likely see a significant fuel economy boost with the smaller displacement and better burn of these newer engines. The RJC (Automotive Researchers' and Journalists' Conference of Japan) gave this engine the 2012 Technology of the Year award. The transmission that will appear in the 2014 MX-5 Miata also won an award from RJC.

That trans is the Skyactiv-Drive automatic trans, a 6-speed gearbox with a lot of new refinements. A manual option (also in 6spd) will also be offered and will, truthfully, likely be the more popular option amongst enthusiasts.

The MX-5 Miata will compete against the Scion FR-S, the new Subaru BRZ, and older Miatas in the landscape. The Scion has not seen the kind of "fandom" that the Miata has, but the Subaru has the potential to compete on that level, given time.

Anonymous wrote on April 26, 2012 - 5:17pm Permalink
Source? Where does Mazda say any of this?
Aaron Turpen wrote on April 26, 2012 - 11:36pm Permalink
Since I can't post links here, I'll direct you to Google. Search for "2014 Miata" and I'm sure you'll find plenty of sources. Thanks, Anonymous.
Anonymous wrote on May 11, 2012 - 5:40am Permalink
Mazda... Please please don't ruin the front grill and bumper. The current one looks fine except it looks like it is smiling. Why have those hard sculpture lines like BMW. Its not a BMW nor does anyone want it to look like one, it will become outdated in no time. The MX5 appeal is its roundness and smooth simple lines. And don't even think about putting silly eyelashes on the headlights like Germans do! It needs to feel free and small not chunky and clumsy. The new engine and light weight approach is a great idea as long as the performance does not suffer. I love my 2010 MX5 Miako 2L, I want the next one to be even better. Its not pretentious and everyone admires it without it costing a fortune.
kimtom wrote on October 29, 2012 - 10:26am Permalink
I agree with posts. a poor" man's roadster." keep it affordable. retain simplistic design, isn't that what appealed to people? Minis are expensive for what you get. you want to WIN in market. PRICE, PRICE, You can win with design, or practicality, style , or price. (quality always a must) but not all 4. (rare) Mazda hit a big win. don't go copy someones else's design!!!! like Ford GM did with Chryslar (van, truck, PT) Chryslar led (past tense) in design, but not in quality! I owned all but ford, I like my 05 miata in design. (mix of XKE, viper, corvette) Last point.: original idea was triump, MG, spitfire philosophy,stay with it. (would love to see a retro- roadster by someone.) signed, former auto engineer.
Anonymous wrote on May 11, 2012 - 8:33am Permalink
I like my 2000 Miata's clean design much better. This is ugly, especially the front end / grill.
Aaron Turpen wrote on May 11, 2012 - 12:55pm Permalink
So far, every complaint from Miata fans has been on the new front end design. It does look a lot like a ripoff of the BMW coupes (namely the M3s).
Anonymous wrote on May 15, 2012 - 2:00pm Permalink
5 speed stick for autocross plz!!!!!! I don't want short 2nd gear!!!!! OK?
Anonymous wrote on February 14, 2013 - 1:11pm Permalink
funny current Miata owners are complaining about the front design. I have never owned one because of the looks. This is the first design I would consider looking at. The old Miata looks like a toy car. This one looks more serious.
Anonymous wrote on March 21, 2013 - 1:41am Permalink
I agree with last post, its the first design I would consider buying. Great car in so many ways, handling and reliability, just never liked the gender bender just got my hair done on my way to the dental wives luncheon Obama sticker design.
Miata lovr wrote on March 29, 2013 - 1:26am Permalink
Please, please don't change the front end look so dramatically. This new look doesn't even look like it belongs on a Miata. Wahhhhhh!! I have the 2007 hard top convertible, top end. Had a 1997 before that got totalled in a FH&R. Was looking to buy a new hardtop convertible for 2014, but....this is not the look I will fall in love with. And how will it handle? Both Miata's I owned/own handled like a dream. You're making me cry. STOP please!
Anonymous wrote on April 16, 2013 - 5:01pm Permalink
Mazda's introduction of the Elan retro-design was a spectacular move and resulted in 25 solid years for its spectacular roadster. But I like the new design and there is no shortage of the oval cars on the market. The lighter weight and perfectly matched hp of this new design will no doubt be spectacular. The car deserves a new look and the so-called M3-styling isn't the brain child nor property of BMW any more than the 1964 Elan was exclusively Lotus. Styles continue to evolve and the M3 worked off of plenty of past concepts to arrive where they are today. The most obvious similarity to the BMW is the massive grill, which every designer on the face of the earth is obsessed with at this time. It wasn't original to the initial M3 and is only being compared to Mazda's new design because they are both roadster. Recall that it was the M3 that followed the success of the Miata anyway, should we wish to point fingers. I say forget about BMW and judge this car on your gut. We are not an M3, forget about it. Consider the benefits of pealing off that "chick" label from the hood of our favorite roadster; although it was never appropriate and only due to a bunch of dolts lacking any appreciation for history and performance. However, having owned two of the original Miata's, I always felt they could have gone even further towards the old Elan lines and stayed a safer distance from the VW Bug. Just being honest...
Bill wrote on July 18, 2014 - 6:17pm Permalink
The Miata needs to step up in body design. The tail lights are childish-looking and aren't sporty, classy at all. The front end also needs a complete refresh. Needs more sex appeal, sexy lines. Personally I think the body design has run its course. I love the car but the body design is a little cheap looking and I've always hoped they would stretch the body a bit. Seems blunted.

LG's New EV Battery Plant Is a Welcome News for Tesla
Tesla Giga Berlin's New Hurdle: It's Not Only the Gov't, but Now Tesla Itself
END_OF_DOCUMENT_TOKEN_TO_BE_REPLACED