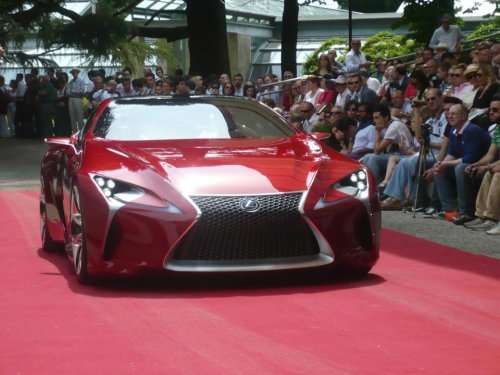 Appearing at the beautiful Villa d'Este, the LF-LC stunned crowds and gathered plenty of notice when Lexus posted a gallery of the beautiful car on Facebook. Here's our take on the sometimes controversial commentary around this car.
Advertisement

Over the Memorial Day weekend here in the States, the Toyota team was busy in Italy showcasing the Lexus LF-LC hybrid to stunned Italian audiences at the Villa d'Este during the Concourso d'Eleganza.

Lexus kindly posted a photo gallery of the car's showing on Facebook, select photos from which you can see in our gallery here. Comments on Facebook were varied and interesting. Torque News found some of them interesting enough that we thought we'd reproduce and comment on them ourselves.

Most of the comments, not surprisingly, given the car's great look, go something like this:
"Car-gasm =D" -Ravi
"Okay this is now officially my dream car!!" -Jacqueline
"YES, this is the car I have been talking about, please, please someone buy me one. LOL" -Patty

But then there was this one from Fico:
"I wouldn't drive it if they gave it to me, hybrid sports cars need to die now."
That is an interesting comment and one that, I would surmise, comes from general ignorance of how hybrids operate. It's true that most hybrids we've come accustomed to in the consumer vehicle market are sluggish and seem underpowered. That's not because they aren't capable of speed and style, but because they're made for one purpose: fuel economy. If a car like the Toyota Prius were to be built forgetting fuel economy, it would be capable of zero to sixty numbers close to many cars with much larger engines.

The reason for this is simple: electric motors, which usually assist the engine during acceleration, are capable of full torque output from 0 RPM. So a hybrid sports car could, realistically, have a faster 0-60 time than another sports car with a comparable engine but no hybrid components. Further, ride and handling can be improved through the superior weight distribution options hybrid components (specifically batteries) can offer.

And this one from Deon:
"looks like a space ship. A million for this considering its a lexus?"
Controversy over whether it's actually going to (or would) sell for $1 million aside, what Deon is missing is this: the LF-LC is a one-off prototype concept, not a production model. If Lexus did decide to take it to production, the price tag would obviously fall accordingly. The other half of Deon's comment seems to hint that because it's Lexus and not McLaren or Ferrari or one of the other big name sports car makers, it can't possibly be worth that much money. The counter to that premise would be that many luxury car makers foray into sports coupes with high dollar (and often innovative) results. Why not Lexus?

Or this from Greg:
"I love Lexus, but not crazy about this one.. I take a Audi R8 over this.. not to mention the other exotics!!"
For many, Greg probably has a point. The LF-LC is definitely not for everyone. Any time an automaker makes bold steps in design, they will create naysayers who don't like what they've done. Automotive design, like any art form, is subjective to the person viewing it. So it's not surprising that some people just don't like the LF-LC's looks.

Compared to the R8 he mentions, the LF-LC is heavily styled and much more angular. The problem with this comparison is that the R8 is a production model meant to appeal to a wide audience of buyers whereas the LF-LC is a concept meant to showcase what Lexus can do (and generate commentary), not find buyers. There's a distinct difference there that makes comparisons awkward.

Summing Up
The Lexus LF-LC hybrid is a beautiful car, whether you like its style or not. It's a showcase of what Lexus says it can do in both design and power train components. Even those who don't like the way the LF-LC looks should be able to at least appreciate and applaud Lexus' boldness in building and showcasing this one of a kind vehicle.

LG's New EV Battery Plant Is a Welcome News for Tesla
Tesla Giga Berlin's New Hurdle: It's Not Only the Gov't, but Now Tesla Itself
END_OF_DOCUMENT_TOKEN_TO_BE_REPLACED