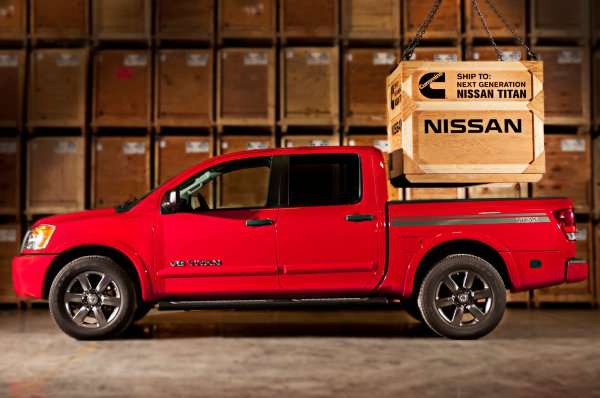 Last Predictions for 2016 Nissan Titan Before Its Unveil

The new Nissan Titan and Titan Diesel will unveil in Detroit on Monday morning. Now that we're down to the wire for the truck, here are a few prognostications based on what we've seen in spy shots and heard in rumor.
Advertisement

When the new 2016 Titan unveils Monday morning at the North American International Auto Show, we'll have full details on the much-anticipated new truck. Based on what we've seen so far, though, this wrap-up of prognostications about the Titan will help whet our appetites until the cover comes off Monday morning. At that point, we'll bring you on the minute information.

Capacities
With the gasoline-driven 2016 Titan, we can expect that components will be beefed up to allow for cargo and towing that is more on par with the current market expectations. The engine in the current Titan is capable of pulling more weight, but drivetrain, chassis and framing components hold that back.
Changes in the past ten years have made it possible to use better metallurgy to give more strength without adding a lot more weight. So we see the new Titan coming forward with current, contemporary high strength steel and engineering to match what's expected in today's half-ton market. With that, of course, will come some added size.

Size
The Nissan Titan is one of the smallest full-sized trucks on the market. It has a smaller footprint, height, and overall width and length than most of the others on offer. This, along with the naturally smaller components that go with it, has meant that the Titan has had a lower towing and cargo capacity than the competition for several years now.

So we predict that the 2016 Nissan Titan will get beefier. The trucks dimensions overall will have to get larger to accommodate heavier-duty components in order to improve towing and cargo to meet current expectations in the market. How much beefier will the truck be? That's hard to guess, but a couple of inches in length would be obvious. As would an added inch or so in height to account for a slightly higher body position for the same reasons.

Near-HD for the Titan Diesel
With a diesel engine outputting 550+ pound feet of torque, it's clear that the current Titan build is not sufficient to control that kind of power. It's very likely that the Titan Diesel will have larger dimensions than even its gasoline counterpart with, at the very least, a larger front overhang to accommodate the bigger diesel engine and the larger cooling and accessories additions that go with that. The radiator for a hefty diesel like this Cummins is far larger than that used for a V8 gasoline engine.

Bigger output also means a sturdier frame, heavier rear-end, thicker drive shaft, beefier suspension, etc. That all means a bigger truck. We can expect the Titan Diesel to be longer, wider, and taller than its predecessor. With towing as the primary focus of the Titan Diesel, we can expect it to have a wider stance to add stability and have a taller body set to raise the bed so it's on par with standards for fifth wheel and gooseneck rigs - things that will inevitably be added to a truck like this.

Design
Finally, we come to the design of the truck: how it looks and feels. This is difficult to predict as the only view we've seen of the new Titan are spy shots that have the rig so heavily camouflaged that it's difficult to see bodywork details. From those photos, we can see a slightly larger, more square-ish front end with larger headlamps and what appears to be thicker grille guards.

The "coupe" appeal of the cab looks like it will stay, with a relatively high belt line and thin windows to give the appearance of a slope to the roofline for that coupe look.

On the interior, of course, massive changes will come. The current Titan is very long in the tooth and its age shows most obviously with its interior fitment. Nissan will probably add some of its signature technologies like the AroundView 360-degree backing system. It would be interesting to see that integrated with some kind of trailer guidance for both hitching up and when maneuvering a trailer in reverse. We hope to see the front row bench remain as an option.

What Else?
There isn't much else to guess without just throwing random darts at the guessboard and hoping to hit something tangible. The Titan Diesel is where all eyes will be and indications are that this will be the big unveil at Detroit, with the gasoline unveil coming as an afterthought. That makes sense, marketing-wise, of course. A 300-odd horsepower, 550+ lb-ft half-ton truck is industry-shaking, at the least. We expect that Nissan will keep the V8 gasoline more or less as-is, since that engine has proven itself well-suited to tasks in the company's truck and SUV lineup.

However the final Titan looks on Monday, it will be the biggest unveil at the Detroit show this year. From there, we will very likely see the little Frontier get some much-needed love as well. Perhaps at Chicago or New York.