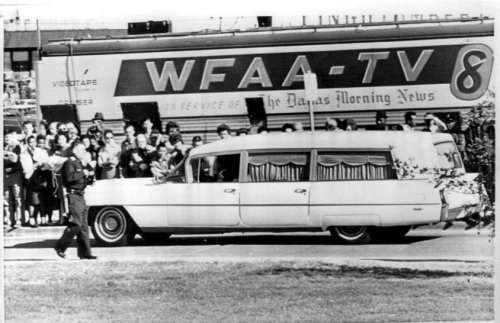 This weekend, Saturday January 21, the Barrett-Jackson car auction company will put the 1964 Cadillac Hearse that carried President John F. Kennedy from the Parkland Memorial Hospital in Dallas, Texas to the Love Field Airport for transport to Washington, D.C. after he was assassinated.
Advertisement

The hearse has a history and is expected to sell for a pretty penny. Driven on that day by Don McElroy, who at the time was a new employee at O'Neal Funderal Home, on November 22, 1963. The driver had no idea what part he would be playing in history that day when he got into the company's brand new hearse and drove it to the hospital. At only 24 years old, McElroy was shocked to find out once he'd arrived.

He recalls placing the president's body in the hearse and then setting up a rear seat so that Jacqueline Kennedy could sit near her husband for the ride to the airport. He recalls that Secret Service took over from there. He remembers that it took him several hours to find the hearse once they'd parked it at the airport and left for D.C.

The hearse was also the first 1964 model built by the Miller-Meteor Company of Ohio and sports body number 64001. It had been the show car at the National Funeral Directors Association convention in 1963 as Cadillac showed its latest to the industry. Vernon O'Neal, then owner of the funeral home, had purchased it from the show in October.

The car's authenticity as the hearse that carried JFK has been endorsed by several convincing sources, including the Professional Car Society's membership. Last year, PCS debunked claims that an ambulance being auctioned had carried JFK from Air Force One to Bethesda Naval Hospital in Maryland. That ambulance had actually been crushed in 1986 in a Boston junkyard and had been photographed for the John F. Kennedy Presidential Library and Museum before the fact.

The hearse, for its part, was in the O'Neill funeral fleet for several years until the home went out of business in the late 1960s. It was then purchased by the Thomae Funeral Home's owner in San Benito, Texas. Henry Thomae, Sr. kept the car until his passing in 2000. It was then sold to Ardeen Vaughan, who owns funeral homes and a hearse dealership in Texas.

Vaughan restored the car and put it up for auction in 2007 with a $1 million reserve. The highest offer was $900,000, so he refused to sell. In 2009, it went up for auction again, but the best offer was only $165,000. Somewhere in the short time frame between 2009 and today, the hearse again changed hands and is not owned by a private party who's hoping to sell it through the Barrett-Jackson firm. The car was recently on eBay for $1.5 million, but did not sell.

At this weekend's auction, there will be no reserve, so the highest bidder will win the car and a huge piece (literally and figuratively) of American history.