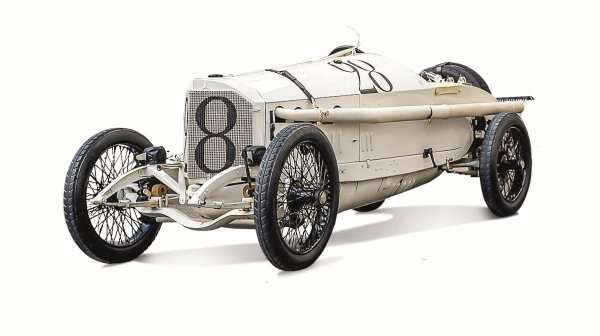 Eight vehicles have made the short list as finalists in this year's IHMA for the 2014 Car of the Year title. Votes are now being accepted through the association's website.
Advertisement

Historic motoring enthusiasts from around the globe have voted at various car shows and rallies for their favorites, narrowing the field down to eight beautiful historic vehicles. Those finalists are now being voted upon publicly on the Historic Motoring Awards website. One of them will drive away with the coveted 2014 Car of the Year trophy.

Last year, the Bugatti 57SC Aerolithe recreation took the title and a Birkin Bentley took it in 2012. The award was first give nin 2011 to a Porsche Type 64 Rekordwagen. Joining that list could be any of eight finalists nominated this year. Here they are, presented chronologically.

The centenary tour Mercedes 18/100 (pictured above) was the winner of the 1914 French Grand Prix as car number 28.

The first Ferrari 250 GTO to come to auction since 1990 sold for $38 million at Bonhams. This exceedingly rare and desirable car was much talked about leading up to the historic auction.

Another Ferrari, this time a 1954 375MM Scaglietti won Best of Show at the Pebble Beach Concours, the first post-war car to ever do so since 1968.

Finally, the record-breaking Sunbeam 350HP of Maclom Campbell, now in the National Motor Museum, had been unseen since its run in 1962.

Volunteers put their hearts into a restoration and rebuild of a Rover-BRM, which was in the 1963 and 1965 Le Mans 24 Hours. That restoration paid off with a historic run at the Le Mans Classic this year.

Amazingly, all six of the Jaguar E-type Lightweight Continuation cars have made the finalists list as well, marking a first for recreations of originals.

Of course, no muscle car lover can deny that the Shelby Cobra Daytona Coupe CSX2287 prototype deserves to be on this short list as well. The car broke 23 records at Bonneville on the Salt Flats in 1965 and became the first car accepted into the National Historic Registry of the United States this year.

The Lotus Type 56 Chassis 3, the groundbreaking gas-turbine Indy 500 car that appeared in 1968, emerged from restoration for the first Indy Historic.

Winners of the International Historic Motoring Awards 2014 will be announced by category at a gala dinner in London on November 20. This will culminate in the naming of the Car of the Year 2014. Voting is open on the historicmotoringawards.com website.