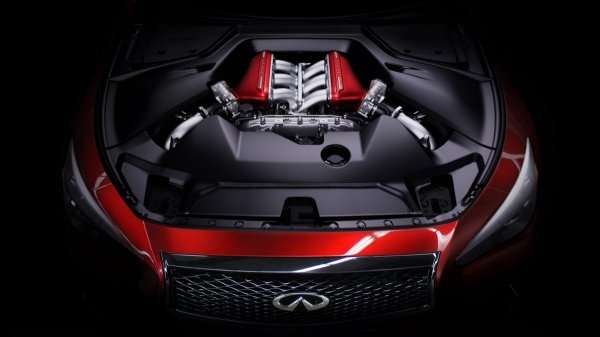 When designing the Q50 Eau Rouge concept that has wowed audiences at car shows this year, Infiniti considered several powertrain options before settling on its Godzilla choice.
Advertisement

When Infiniti first unveiled the Eau Rouge concept this year, it was the fulfillment of years of rumors that the premium automaker would be offering a sports sedan concept as their own version of the Nissan GT-R. Infiniti, known for its winning streak with Infiniti Redbull Racing as part of Formula One, has been missing a true sports car. The Q60 coupe, while impressive, is more a luxury coupe than a sports coupe.

With the unveil of the car, but no details on powertrain, many of us thought Infiniti might unveil its first V8 engine offering in a car, hitherto only seen in the brand's sport utilities. The other option seemed to be, obviously, the 3.8-liter beast that powers the GT-R (aka Godzilla).

Although the latter turned out to be the choice for the Q50 Eau Rouge, we now know that Infiniti didn't limit itself to just gasoline engine options for the sport sedan. According to a report in Autoblog, Kyle Bazemore, Infiniti senior communications manager, says there were other options considered as well.

Bazemore says that they briefly considered the 5.0 and 5.6-liter V8 engines already in Infiniti's lineup (both appearing in SUVs such as the QX80). Alliance partners at Mercedes-Benz or Renault could have also provided a similar engine for the Eau Rouge.

That's not all, though. Bazemore continues by saying that the design team also considered a high-powered sports diesel or even hybrid tuning. That latter might seem obvious, given the persistent rumors that the GT-R is going hybrid sometime soon (many expected the 2015 redesign to include a hybrid). The way Bazemore put it, however, the hybrid option would have been more about sports tuning than about efficiency. "At one point, we looked at hybrid tuning, where the batteries, electric motor and charging equipment were all uprated to provide significant clean power in the form of an 'electric supercharger," he told Autoblog.

When they ultimately settled on the Godzilla powerplant, though, Infiniti then began fine-tuning it to match the expectations of the Q50 Eau Rouge. This, of course, is why the car's engine fits somewhere between the GT-R base model and the GT-R NISMO-tuned offerings, landing at 560 horsepower and 443 lb-ft of torque.

The possibilities of the other power options for the Infiniti Q50 Eau Rouge, though, are intriguing.