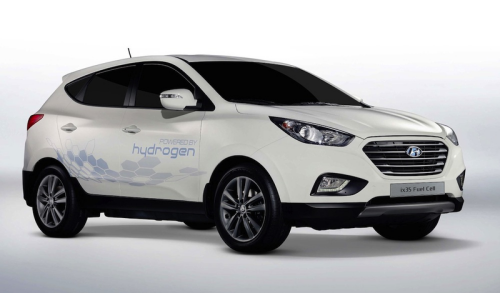 Hyundai will begin production of the ix35 Fuel Cell crossover this December. Production numbers will be small, with only about 1,000 to be made by 2015, but this begins two years before the competition's promised dates.
Advertisement

Hyundai will begin production of the ix35 Fuel Cell crossover at its Ulsan manufacturing facility in Korea this December. The company has targeted a total of 1,000 units to be made by 2015.

The company is calling the ix35 Fuel Cell its "halo vehicle" inside its Blue Drive sub-brand (where its cleanest vehicles are badged) and has already signed contracts for lease and sale to cities in Denmark and Sweden. The company's ultimate goal is to get to 10,000 units after 2015.

The ix35 will be sold not just to fleets in Europe, but will also be offered for lease on the consumer market in Korea and California. This puts the FCEV into production a full two years before Toyota, Honda, General Motors, and others have promised theirs (2015).

The fuel economy and range for the latest generation ix35 are 10% better than the previous model, with a power density of more than 640 W/L and in a smaller package than the previous generation had. The fuel cell stack uses low-cost bipolar plate and gasket materials and puts out 1.65kW per liter at 50~450V and is able to operate at temperatures as low as -22F. The stack uses ambient air rather than compressed air, another improvement over previous generations that makes it much more consumer friendly and removes the majority of the noise the vehicle makes (older prototypes had an on-board air compressor).

The ix35 shares the lithium-polymer battery the Sonata Hybrid uses as well as its brake energy regeneration system. At lower speeds and when stopped, the fuel cell stack will stop producing power so long as the battery is up to par, which reduces the amount of energy wasted by the cells during low-use situations.

The ix35 Fuel Cell has a 0-60 mph time of 12.5 seconds, a top speed of 100 miles per hour, and a 365 mile range. All similar to the gasoline model it is based upon. The ix35 is the European version of the Tucson here in the U.S. They have not announced price points for the vehicles, but say they will be doing so nearer to their release in early 2013.