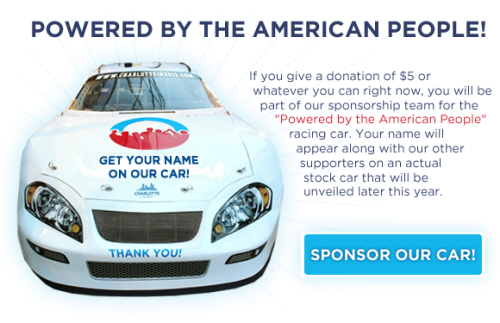 How to get your name on a NASCAR for only $5

All you have to do is become a Democrat and eat tofu to make up for the carbon emissions of the "Powered by the American People" petroleum-fueled stock car being sponsored by donations of as little as $5.
Advertisement

Admit it, you found that joke funny. Most people would not associate NASCAR with the Democratic National Convention. Democrats are, shall we say, not generally considered the auto racing sport's demographic. This should have been proven with finality when First Lady Michelle Obama was booed at a NASCAR event in Florida last year.

In a place like North Carolina, where this year's Democratic National Convention will be held, stereotypes are left for less chic states like South Carolina. It turns out that registered Democrat, International Motorsports Hall of Fame member, and general manager of NASCAR's Charlotte Motor Speedway, Howard "Humpy" Wheeler, Jr. happens to be supporting the convention with something unique. A car.

Not just any car, but a NASCAR stock car that's ready for action. The car is "Powered by the American People" and will be emblazoned with the names of every person who donates $5 or more to the convention's strongbox. The 2012 Democratic Convention is (hoped) to be funded entirely by grassroots donations from Democrats around the country, with no special interest, corporate, or lobbyist money included. The reader can decide if they believe that.

Still, this is way cooler than anything the Republican National Convention has come up with so far. That will be held in Tampa, Florida, which is just a hop, skip and a jump from the NASCAR mecca of Daytona Beach. The two convention locations are, however, roughly equidistant from Talladega, Alabama - something not lost on some researchers, who'll also note that connecting the three makes a near-perfect right triangle on Google Maps.

The Republicans, for their part, are still looking for a candidate, though the field has been narrowed to only three with MItt Romney leading the pack - but with Dr. Ron Paul and pundit Newt Gingrich continuing to put up a fight. The Democrats, meanwhile, are basically decided on Obama, who will be looking for a second term as president. So it's no wonder the GOP has not yet come up with a cool marketing scheme for their convention - it's hard to put together something like a NASCAR stock car with a candidate's logo on it if you aren't sure who the candidate will be. Right?

So if you're not an Obama supporter, not a Democrat, or just not interested in politics, maybe you should be. After all, they're sporting the power of NASCAR now. Plus, who wouldn't want his or her name emblazoned on a NASCAR? I predict that thousands of on-the-fence Republican NASCAR supporters are about to change sides and millions of Democrats who up until now snobbishly looked down on stock car racing will suddenly change their tune - at least until November.