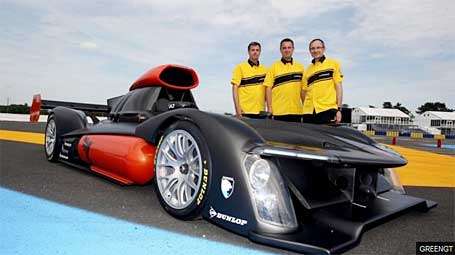 The prototype GreenGT LMP hydrogen fuel cell racer made an appearance at this year's 24 Hours of Le Mans. Now it's developers say it will compete in the 2013 Le Mans, having secured pit box 56 and a sponsorship from Dunlop racing tires.
Advertisement

Endurance racing is one place where electric cars have yet to make a showing. Until now. Distance is where hydrogen fuel cells can shine and the GreenGT LMP exemplifies that as a purpose-built Le Mans endurance racer.

The GreenGT's team has secured sponsorship from Dunlop's racing tires division and received a reservation for pit box #56 in the 2013 24 Hours of Le Mans.

The GreenGT is no slouch on the track either. Powered by two motors, combining to put out 537 horsepower and 2,950 pound-feet of torque.. all going to those two rear wheels, which will now be clad in high performance Dunlop tires. The car's fuel supply will propel it up to 186 miles per hour for about 40 minutes per tank. That's on par with most similar Le Mans cars. By comparison, the Audi R 15 TDI LMP1, considered one of the best recent contenders on the track, had a V10, 5,500cc diesel engine that outputs 590 horsepower and 775 lb-ft of torque (at peak).

Although other hydrogen fuel cell (HFC) vehicles have run Le Mans, including the Mazda RX-8 RE, none were purpose-built for the 24 Hours race like the GreenGT Le Mans Prototype is.

Recent rule changes at Le Mans required the cockpit to be closed and pit crews to be limited to one active pneumatic wrench. Traditionally, drivers would exit the car to assist or refresh, but with closed cockpits this has become more awkward. In some ways, this actually gives hydrogen an advantage. We'll see next year.