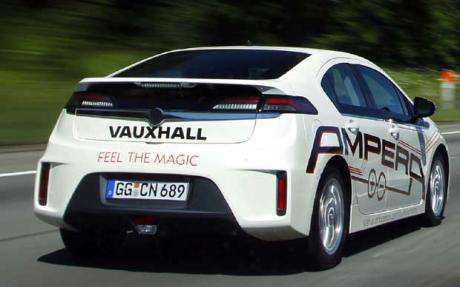 General Motors has yet again come under fire for misleading advertising on the Volt, in this case the European version, the Ampera. The United Kingdom has banned an ad claiming the Ampera is capable of 360 miles of range.
Advertisement

General Motors' UK arm is Vauxhall, which markets the Ampera - the British version of the Volt. A new television advertisement for the Ampera has been banned by authorities in the United Kingdom as being misleading.

The UK Advertising Standards Authority (similar to the Federal Communications Commission in the U.S.) says that GM's claim that the Ampera is capable of 360 miles of range, but without qualifying that with how much is on battery power versus petrol, is misleading. The ad includes a disclaimer, but it is difficult to read and even less simple to decipher. It reads:

The ASA says that the advertisement, which you can view below, gives consumers the impression that the Ampera is an electric car and that the claimed 360-mile range is on electricity alone. The ad is full of imagery of cables, batteries, and uses the slogan "Driving electricity further." The Daily Mail quotes the standards bureau as saying:

"We considered that throughout the ad the emphasis was on the fact that the car was being driven electrically, and that most viewers would not understand that the car was in some circumstances being powered by electricity generated with a petrol engine. The ad promoted an innovative product which many viewers would not immediately understand and we therefore considered that it would need to explicitly state that the car had a petrol engine.

"Because it did not clearly explain how the vehicle worked in extended-range mode, we concluded that the ad was misleading."

This isn't the first time GM's been in hot water over Volt claims. Earlier this year, Chevrolet ads on YouTube featuring Volt buyers claiming huge cost of ownership savings for the Volt were targeted by media who quoted the line director for the Volt, Tony Posawatz, who said to Bloomberg in an interview that the Volt, after tax credits, had about the same cost of ownership as an equivalent passenger car.

In 2010, ads by General Motors claiming to have paid back their government-backed TARP (bailout) loans were also decried as misleading and false. After a year-long wait for a Freedom of Information Act request to be fulfilled by the U.S. Department of the Treasury, the Competitive Enterprise Institute showed the claims to be false, but the ad had already run its course.

GM is toeing a fine line in legalese, creating ads that appear to be true and are, very technically, true, but which are crafted in such a way to mislead the viewer's perception. The Vauxhall Ampera, like the Chevrolet Volt, is a capable range extended electric car, but it is not an all-electric vehicle nor is it designed to be driven as electric-only. Although GM is working hard to brand the Volt as the ultimate green machine, their efforts are becoming a concern when it comes to truth in advertising.

Jon Jermey wrote on August 26, 2012 - 5:25pm Permalink
What they actually meant to say was that when it explodes, pieces of it can travel up to 360 miles.
Anonymous wrote on August 27, 2012 - 8:22am Permalink
when you drive it and see for yourself on any length of trip, 38-40mpg on the highway combined because the electric goes only about 25 miles and then you run on gas. you say 40K for a IPOD rip off interior and gas milage and space that makes a Focus look big, I think I would take the cheaper car and and get my savings in the front.