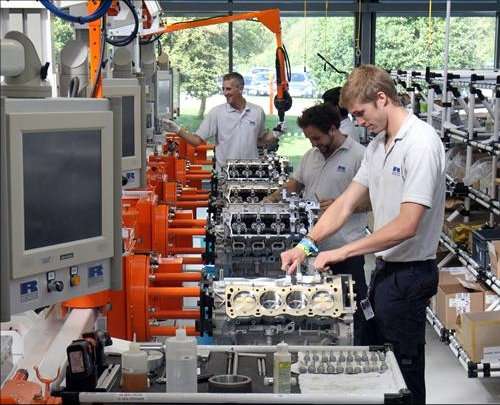 Engines from some of the world's most recognizable names in all walks of auto manufacturing receive the prestigious EYA this year. Some were surprises, others were not as 87 of the world's leading motor journalists chose the winners.
Advertisement

A jury of 87 of the world's most well-recognized figures in the automotive journalism industry came together again this year to name finalists and winners for several of the most sought-after awards given to manufacturers globally. The Engine Technology International Engine of the Year Award is one of those, recognizing automakers for innovation, engineering, and manufacturing excellence.

The awards are split by engine size, starting at the smallest 1.0-liter to the largest 4.5-liter. Here are notable winners this year.

1.0-liter Ford EcoBoost
This engine won the award for the second time in a row, marking its engineering innovation. You can see Don Bain's reportage of that at this link for more details.

2.5-liter Audi TFSI
In the 2.0-2.5 Liter category, the Engine of the Year Award went to Audi for the fourth year running, once again declaring the 2.5-liter Audi TFSI for its performance and excellence. This engine appears in some of Audi's most prestigious cars, including the original Audi quattro and Sport quattro S1 rally runners and the TT RS Coupe and Roadster. This is Audi's ninth category win at the International awards this year.

3.8-liter M838T McLaren
The first new name to take the win in the 3.0-4.0 Liter category, the McLaren engine was cited for his combination of light weight, highly efficient operation and powerful performance. The M838T engine was designed and developed in collaboration with Ricardo, who also makes the engine at their Shoreham Technical Centre (pictured above), the M838T is fitted to the 12C and 12C Spider. It produces 625PS and 800Nm of torque. The engine was specifically named as a likely harbinger of things to follow in supercar manufacturing.

6.3-liter Ferrari V12
In the Over 4-liter category, Ferrari had to dethrone itself, displacing it's long-running wins with the 4.5-liter V8 Prancing Horse with the new, far larger 6.3-liter V12 from the F12berlinetta. The former champion V8 took second place to the new V12, proving that in supercars, bigger is often better and more likely than not, it takes a Ferrari to beat a Ferrari.

The International Engine of the Year Awards have been presented every year for fifteen years, usually at the Engine Expo. Journalists from around the world are invited by the previous year's committee to participate in the vetting process. This year, 87 journalists were included.