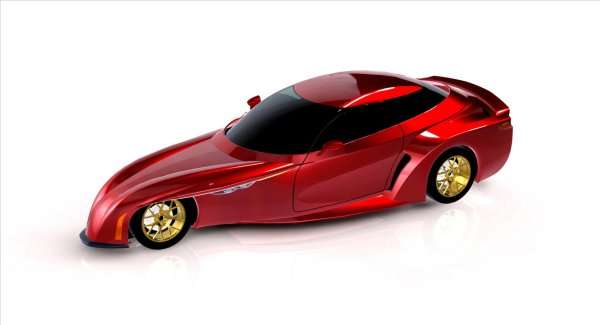 The new DeltaWing design is a four-passenger car based on the unique Delta architecture and design meant to showcase the possibilities of this unique Indy racing inspiration.
Advertisement

DeltaWing Technologies, which builds the DeltaWing Indy race car that took the racing world by storm a couple of years ago as a Garage 56 entry in partnership with Nissan, has released a CAD rendering of a street-legal, four-passenger car based on their Delta architecture. We're dubbing it the DeltaWing Sedan, since the company failed to name it themselves.

The rendering, bless their hearts, is a bit amateurish, but gets the point across. DeltaWing Technologies wants to sell this idea to an automaker interested in building the car. Why? Because a street-legal version of the wedge-shaped (not the classic Bertone wedge, but the other way) car has many advantages over current architectures.

Nobody is going to argue that point. Most cars today, for all their style and variation, are basically a rectangle with a wheel at each corner (or thereabouts). This requires that their weight ratio be balanced and the best cars in this traditional build have about a 50:50 front:rear ratio. With a three-wheeled wedge, however, things change. More weight on the wide portion and less weight on the thin end is better.

In the DeltaWing's design, this means the front axle can get away with thinner tires than would otherwise be needed, which reduces road friction. In the case of their TUDOR racer, it's meant a car that is substantially lighter than the competition and thus a car that can utilize a smaller engine with better fuel economy to compete equally against larger, heavier, less efficient competition. That can mean a lot in endurance racing. On the public road, it also means a more efficient car which means fewer stops at the gas station.

“Many of the aerodynamic, lightweight and handling benefits of the race car can translate to the street,” said Don Panoz, chairman of DeltaWing Technologies Inc. “We are competing at the highest levels of road racing with half the weight, half the horsepower, and nearly half of the fuel consumption. We believe we can deliver similar results on the street without compromising safety, comfort and performance. We have a formula that’s highly efficient and still fun to drive.”

Panoz also said the DeltaWing race car proves teams do not have to rely heavily on horsepower to be competitive. “Design, technology, efficient use of lightweight materials, lower horsepower and lower fuel consumption is a winning formula. I believe this is the future of motorsports, and key to meeting the next decade’s fuel economy and emissions standards.”

That about sums up the idea. Are OEMs clamoring to the DeltaWing door to get ahold of this? Doubtful. Why? Sales and marketing.

Of course, the whole Big Oil tinfoil hat thing will come out from some who will claim that this was somehow stopped by the evil Koch Brothers and their minions. The reality is that weird doesn't sell well in automotive. Do something unusual, people don't beat a path to your sales floor to buy it. They ooh and ahh at the auto show, say "wow" when they read about it in the auto magazine, then go buy a Camry or F-150 instead.

It is what it is. You can be unique, unusual, even innovative with your automotive design. But you can't be odd. The DeltaWing Sedan is odd. That's just how it is in automotive marketing and sales. People want all four wheels and to only give them three (or the appearance thereof) is to leave them feeling cheated.