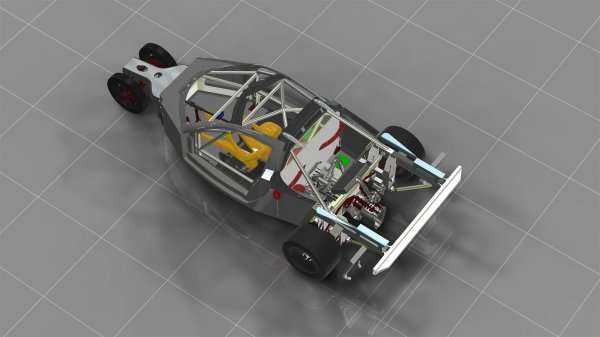 DeltaWing, whose V-shaped race car became a sensation in Formula racing, has announced plans and shown a concept for GT racing with the design as well as updates on the road car planned for possible production.
Advertisement

The DeltaWing Technology Group, which built the DeltaWing Formula racer in collaboration with Nissan, is building a DeltaWing GT concept to unveil later this year. The car will be part of the DeltaWing Racing Cars program, which famously supplies the vehicles and parts for the Claro/TracFone DeltaWing Racing Cars team in TUDOR. The GT car will be a two-seat performance car that is designed to use far less horsepower with similar performance results to current track cars. High efficiency would become its greatest strength on the field.

DeltaWing says that this new GT project puts them one step closer to a road-going car as well, as it involves a common chassis design and many of the requirements of a GT car mirror those of a street-legal vehicle. “This is an important point in the DeltaWing® project’s next phase,” said Don Panoz, DeltaWing Technology Group chairman and CEO. “We’ve been very busy leading up to this launch announcement, and we’ll remain quite busy coordinating the race car project’s many details.”

Along those lines, the new design for the DeltaWing road-going car, based on this chassis, underwent an independent engineering analysis as a four-passenger road car concept. That analysis found that the car would achieve an unadjusted EPA fuel economy rating of almost 74 mpg on the highway and 57 mpg combined. That meets 2025 CAFE standards as of today and would make the DeltaWing the most fuel-efficient internal combustion engine car on the road.

The analysis was carried out by Meszler Engineering Services via the International Council on Clean Transportation, which holds board membership with the DeltaWing Technology Group. “I’m very pleased to see how this objective testing validates and even exceeds our initial estimates,” said Panoz. “This key milestone allows us to immediately move forward with our plans to build prototype two- and four-seat DeltaWing® vehicles and begin real-world testing.”

Jose Abed wrote on March 27, 2015 - 8:16pm Permalink
i will like to learn more about the delta car I think will be a fantastic develope