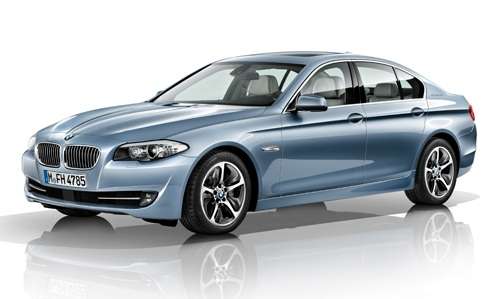 At the North American International Auto Show in Detroit today, BMW announced pricing for its ActiveHybrid 5, the latest hybrid entry into the company's luxury lineup, which goes on sale in March of this year.
Advertisement

The plug-in electric is the company's first serious foray into hybrids, with it's budget-busting top-end hybrids showing little economy improvement despite the “h” badge.

First introduced at the 2010 Geneva Auto Show, the ActiveHybrid 5 is based on the 535i sedan using its 3.0-liter inline six-cylinder engine and 8-speed automatic transmission. Between those is sandwiched an electric motor, which can assist the engine or work on its own to propel the car for about two miles at low speeds (less than 37mph). Combined output for the cars is 335hp and 330lb-ft. The EPA gives it a 20/30 city/highway miles per gallon rating.

The ActiveHybrid 5's nearest competition are the Infiniti M35h and the Lexus GS 450h, both of which it's clearly targeted in terms of market segment. The M35h is getting a redesign this year as well, as announced in Frankfurt, and has a price tag of $53,700 base. It's considered less luxurious than the BMW, but has slightly better mileage numbers at 27/32. The GS 450h is base priced at $58,950 and is apples-to-apples competition with the BMW. Its fuel economy is a paltry 22/25mpg, but the 2013 edition (yet to be EPA tested) is expected to improve that by nearly 30%.

One thing setting the BMW apart from competition, as always, is performance. The ActiveHybrid 5 includes the company's new Driving Dynamics Control (DDC) system that aligns the throttle, transmission, stability-control and damping characteristics into four diver-selectable modes: Sport, Sport+, Comfort and Eco Pro. These settings position the car's components to exactly what their names suggest: sporty, sportier, comfortable, and economical.

In Eco Pro, the powertrain is optimized for relaxed driving and maximum efficiency, putting the electric motor to use as much as possible to take weight off of the engine and reduce fuel consumption. At highway speeds, the engine will often shut off and coast, using no fuel at all, while the electric motor also regenerates power during slowing and stopping.

Another thing setting the BMW apart from the Lexus is its overall “intelligent energy management” system. This system combines the standard navigation (GPS) in the car with computer-controlled forward-thinking that anticipates driving conditions (hills, highway driving coming into city driving, etc) to maximize battery charge and usage in order to improve economy and performance.

Clearly BMW is entering this segment in a big way, hoping to gain ground on Toyota's control through Lexus before the 2013 model releases.

LG's New EV Battery Plant Is a Welcome News for Tesla
Tesla Giga Berlin's New Hurdle: It's Not Only the Gov't, but Now Tesla Itself
END_OF_DOCUMENT_TOKEN_TO_BE_REPLACED