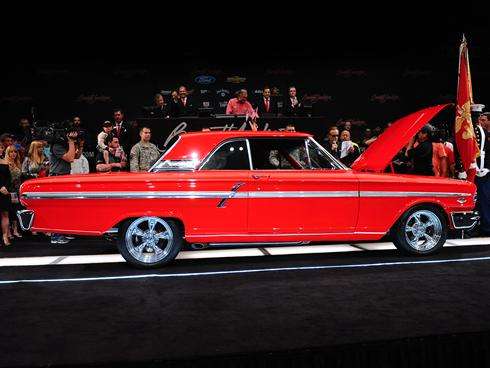 The 2012 Barrett-Jackson auction in Scottsdale was greatly anticipated by collectors and enthusiasts alike. One of the nation's largest antique and collectible auto auctions, it's also an event where a lot of philanthropy takes place, as evidenced this year by the $5.9 million in charitable funds raised at the auction.

That includes the $1 million raised by the event's emerging "revolving auction" car, a 1964 Ford Fairlane custom in bright red hardtop with a 427 V8 ROUSH Performance. The car was originally donated by Barret-Jackson's own Steve Davis in 2011 at their Las Vegas auction where it was purchased by Ron Prate of Chandler, Arizona for $700,000 - well beyond the value of this incredible car. Prate re-donated the car to this year's Scottsdale auction, where it was again sold for charity, this time raising a whopping $1 million! Those proceeds go towards the Armed Forces Foundation.

Following closely behind, a 2013 Chevrolet Corvette 427 Convertible raised $600,000. Another bidder tacked on an additional $100,000 as a donation to the car's benefactor, totaling $700,000 going to the AARP Drive to End Hunger, a national charity working to end hunger amongst older Americans.

Another notable charity sale included a 1993 Chevrolet Corvette 40th Anniversary Coupe going for $125,000 to benefit cancer research at The Translational Genomics Research Institute (TGen). This institute benefits from an ongoing Barret-Jackson Cancer Research Fund that was established in honor of Russ and Brian Jackson. "I am so energized and honored by the research being done in memory of my dad and brother,” Chairman and CEO Craig Jackson of Barrett-Jackson Auctions said. Both died of colon cancer.

Charities represented at the event by direct donation, through donated vehicles appearing on the auction block, and other sponsorships were present at the auction last week. A total of 22 vehicles were sold to benefit those charities. They included charities for children, military personnel, medical research, community support groups, and more.

"When you see a good cause needing support, you want to do everything you can to help," added Steve Davis, President of Barrett-Jackson. "It's inspiring to see such a diverse range of companies and people come together and share a common vision to help these organizations."

What more can be said? The outpouring of charity at the event is inspiring and shows that there is more to huge auctions like Barrett-Jackson than just flashy cars and monied buyers. Few events draw the kind of charitable outpouring for multiple causes as does this auto auction.

Toyota's First EV Will Have a Name of BZ: Toyota BZ
First Videos From Inside The Boring Company's Las Vegas Loop
END_OF_DOCUMENT_TOKEN_TO_BE_REPLACED