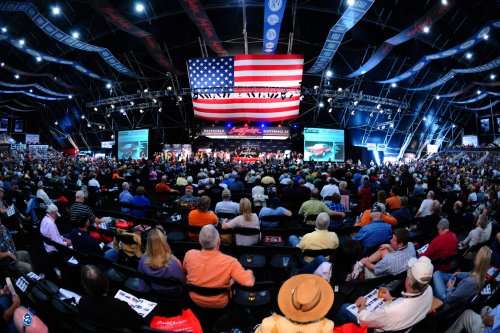 Highlights of the Barrett-Jackson collector car auction this weekend

Barrett Jackson holds four automotive auctions a year in various parts of the U.S. This weekend is the most-anticipated so far, to be held in Scottsdale, Arizona, and featuring some of the most collectible of the classic collector cars ever featured by the auctioneer. Here are a few highlights from Friday, Saturday and Sunday's blocks.
Advertisement

The auction event opened on Sunday the 15th with celebrities like rock singer Bret Michaels in attendance. The cars to be auctioned were showcased so that prospective buyers could get to know them. Several smaller auctions for charity and special events are also being held over the week-long show.

Each day will have a grand showcase of vehicles being offered. Here are some highlights:

For the muscle car enthusiast:
A 1932 and '34 Ford Custom Cabriolet and a 32 Roadster Custom, both fully restored, are up on Friday. A 1939 Custom Deluxe 2-door in orange with flames is also up for auction. Several 2007 Ford Shelby GT-H convertibles are there for those with a modern taste. No one can deny the awesomeness of the 1969 Ford Mustang Mach 1 Fastback either.

If you have more of a Hazzard style, you can view the original Lee 1 at the show and then bid on a 1969 Dodge Charger in General Lee attire or a 1970 Dodge Challenger T/A Coupe or 2-door hardtop.

Or try the 1970 Plymouth GTX custom 2-door on for size. Or the always-awesome 1970 AAR 'Cuda. In fact, there are around a dozen Barracudas up this weekend. A 1969 or 1970 Pontiac GTO convertible are also to be up on the block. A 1971 Oldsmobile 442 convertible is going to some lucky buyer too.

Of course, a couple of 1941 Willys American Custom Coupes, one with yellow and orange flames, are hard to ignore.

Thunderbirds:
The Ford Thunderbird enjoys a large following of admirers and enthusiasts. Several are being offered at Barrett-Jackson in the Scottsdale auction. The 1955 hard top convertible is hard to beat. Or try your choice of a 1956 or one of two 1957 convertibles. If 57 is your year, then the Thunderbird E Roadster in cherry red might be your best bet (or in peach if you prefer). Like the new 'birds? Maybe a 1962 Sports Roadster or a 2005 Thunderbird 50th Anniversary Convertible will fit.

Bel Airs and Impalas:
Another classic that has a huge following of admirers is the Chevrolet Bel Air and Impala line of the 1950s and 60s. The auction features several, including a 1955 and 1956 Bel Air Custom Convertible as well as a stately 1958 Impala 2-door in black as hardtop or convertible. A 1956 210 Del Ray Custom 2-door or a 1961 Impala SS convertible might be your thing. In fact, name your Bel Air (even a coveted '57) and it's going to be there - likely in more than one rendition.

Prefer the street rod look for your Bel Air? A '57 custom 2-door with the engine sticking out and all the exhaust trimmings (plus red yellow flames) is just the ticket. Includes a pony tank on the front bumper.

Not quite the same, but one of this author's favorites is the 1955 and 1956 and '57 Chevrolet Nomad Custom Wagons to be sold.

Pickups:
Got a hankering for the working man's ride of yesteryear? Try a 1956 Ford F-100 in black tones or classic black. Both will be there. If purple is more your thing, a '56 F-100 in that color is coming up too. Like them older and more tricked out? A 1953 Chevrolet Custom Pickup in bright yellow with chrome is going on the block. More a working man's truck than a showcase might be the 1940 V-8 Ford in two-tone restoration.

The flashiest pickup at Barrett-Jackson this weekend might be the 1932 Ford Custom with racing numbers and lots of chrome accents.

Real Classics of Style:
What would a classic car auction be without some old school representatives of high style? Putting the "class" into classic, there are several great vehicles on the Barrett-Jackson block. The 1929 Ford Model A Custom in two-tone is at Barrett-Jackson this year. The 1924 Cadillac V-63 Phaeton is there. Plus a 1934 Auburn 850Y Phaeton, a 1936 Packard 120 Phaeton, and a 1949 Packard Victoria Convertible are all there Friday. Speaking of Packards, the star of the show might be the 1934 Packard 8 sedan. Perhaps you prefer a woody? A 1936 and 1937 Ford Custom Woody Wagon will be there.

The 1939 Lincoln Zephyr that Barrett-Jackson will show on Friday and another on Saturday are all about style. A 1954 Kaiser-Durrin Convertible is a real sloop's sloop. Like gangsters? How about a 1933 DeSoto 4-door sedan complete with Tommy gun props? You can't go wrong with a 1948 Lincoln Continental convertible, either. Never mind the 1960 Cadillac Eldorado Biarritz convertible, which just oozes class.

Unusual and Unique:
Maybe you'd prefer to bid on something you don't see everyday? How about a 1929 Ford Model A Snow Bird, complete with tracks? Maybe you're more the traveling type and would like a 1963 Volkswagen 23 Window Microbus with camper trailer. The 1957 Studebaker Golden Hawk is full of angles and fins too. Prefer things a little more creepy? Get the 1964 Cadillac Hearse then.

Like them rocket-ship instead? Jump in the 1917 Crow Lakester Custom Roadster! Or maybe you'd prefer movie cars? How about the 1966 Monkees Car replica?

You name it, it's probably up for auction or will be soon at Barrett-Jackson. This promises to be a very cool weekend of classic car excitement in Scottsdale, Arizona.