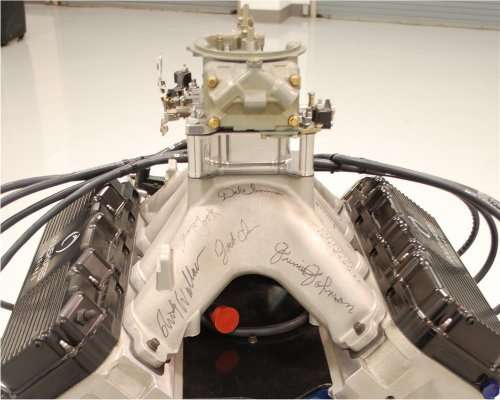 Barrett-Jackson to auction NASCAR Hall of Fame engine for charity

The engine is a cutaway that an electric motor turns to show how the technology for various components work, with pistons, valves, and more moving slowly in demonstration. Uniquely, this engine has been signed by several living NASCAR Hall of Famers and is being sold to benefit two charities that the museum the NASCAR has supported for years.

The D3 Spint Cup series engine was donated to the museum by Roush Yates in 2010 at the Hall of Fame's grand opening and has been recently replaced with a new Roush Yates Ford FR9 Sprint Cup Series engine, showing the latest in NASCAR-level fuel injection and operations technology for race engines.

The engine will be on display at the opening of the Barrett-Jackson auction in Scottsdale, Arizona - one of the nation's largest automotive auctions - on January 13 and will be put on the block on January 20 as one of the premier auctions of the event. The D3 has been signed by Hall of Famers Junior Johnson, Dale Inman, Glen and Leonard Wood, Richard Petty, Bobby Allison, Rusty Wallace and nominees (to be inducted next month) Jack Ingram and Jerry Cook. Rusty Wallace and Leonard Wood will be on hand when the engine is auctioned on Sunday the 20th.

A majority of the proceeds will go to long-time NASCAR charity recipient Tree of Life, which is based in Mission, South Dakota. Tree of Life provides food pantry, clothing distribution, meals, emergency home repairs, crisis center support, and suicide prevention services to the Native Americans in the Dakotas. The rest of the proceeds will go towards the Friends of the NASCAR Hall of Fame Foundation, which provides educational field trips to underprivileged youths across the region.

"This is a great educational piece that any true gear head would love to own," said Doug Yates, CEO of Roush Yates Engines. "We are so happy to be able to help benefit the Tree of Life and the Friends of the NASCAR Hall of Fame foundation."

The engine is Barrett auction lot number 1553, which can be viewed here.