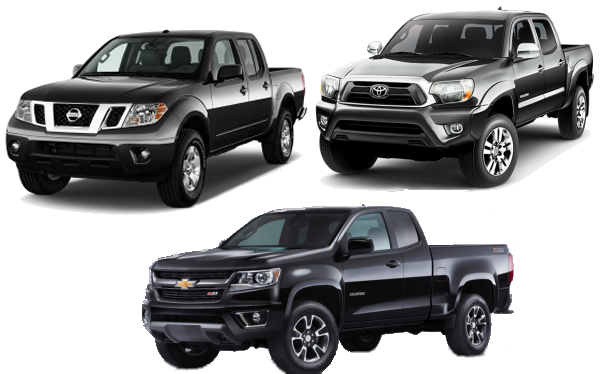 The Denver Auto Show meant a chance to see all three of the mid-sized pickup trucks on the market: the Toyota Tacoma, the Nissan Frontier, and the new Chevrolet Colorado. We climbed in and rooted around. Here's what we came away with on a first impression.
Advertisement

On the floor of the 2014 Denver Auto Show, those interested in seeing the current-generation Nissan Frontier, Toyota Tacoma, and the new Chevrolet Colorado can do so. On press day, members of the press were able to climb in, on, and under these trucks to get a more full impression of what they are.

Given this opportunity, I did exactly that. Setting aside the driving experience, which I have had in the Tacoma and Frontier but not the Colorado, let's examine the trucks from a visual and tactile point of view.

Both the Frontier and Tacoma are getting long in the tooth. They've both been on the market for more than five years in their current iteration - about seven for each, in fact. The Tacoma is the sales leader in the mid-sized truck market, but the Frontier has seen big sales gains for several months running now. We can expect that the Colorado will also begin cutting into the Tacoma's share.

Visually, the three trucks are distinct. The Frontier is more angular in profile than is the Tacoma while the Colorado falls somewhere between them. From the front, the Toyota has more going on, with a lot of swooping lines and grille work. The Nissan has been in the same three-part grille and heavy chrome U-shape since its inception while the new Colorado has a more traditional pickup truck grille that is less about chrome and more about a wide opening.

Inside, the Frontier is still the largest in its four-door configuration, but the win for comfort level is likely a tossup between the Tacoma and the Colorado. The Tacoma is definitely the most ergonomic from the driver's perspective in terms of layout and storage.

Offroad, it's very unlikely that the 4x4 packages offered by Chevrolet will trump the Nissan's dominant Pro-4x package, but it will likely rival the Tacoma. Utility in terms of towing and hauling, however, will definitely go to the new Colorado.

Finally, though, we can see the biggest win from the introduction of the Chevrolet Colorado: market revitalization. Nissan will be revitalizing the Frontier, likely at the same time they unveil the new 2016 Nissan Titan at the Detroit show. Toyota's representatives in Denver, for their part, were quietly enthusiastic that the company now had incentive to push forward updates for the Tacoma as well. The rumor they wouldn't confirm was that the Tacoma is now fast-tracked for that update.

This is good news for the mid-sized pickup truck segment.