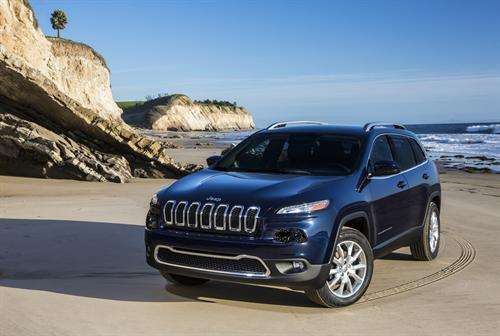 The re-designed 2014 Cherokee debuts at the 2013 Shanghai Auto Show, giving an international audience its first glimpse of the all-new SUV.
Advertisement

When the all-new 2014 Jeep Cherokee was revealed at the New York International Auto Show, it immediately created a "love it or hate it" reaction from the automotive press and the public at large. For Jeep, the styling is a departure from the norm, carrying on some traditions while delving into new territory in others.

Now, the new 2014 Cherokee has made its international debut, being unveiled at the 2013 Shanghai Auto Show in China to the world's largest automotive market. The mid-sized SUV will unveil on April 20 there and has already created a lot of buzz for itself in the overseas media. In China, the Cherokee is known as the Zi You Guang and will begin sales at the end of this year to an eager Chinese market.

“China is the largest market for the Jeep brand outside of the U.S., and one out of every five vehicles in the mid-size SUV segment is sold in China. Hence, it just makes sense that the new Jeep Cherokee has its international debut in Shanghai,” said Manley.

In other parts of the world, the Jeep Cherokee is not as popular, though it has a strong following in some sales regions in Europe. Mid-sized SUVs are a fickle market globally, doing very well in some areas and poorly in others. This may change with the all-new 2014 Jeep Cherokee's design, however, with it's higher fuel efficiency and new Fiat-inspired looks.

The 2014 Cherokee has up to thirty percent better fuel economy thanks to its segment-first nine-speed automatic transmission. In China, the new Cherokee will include two 4x4 systems: Jeep Active Drive I with a 1-speed power transfer unit (PTU) and Jeep Active Drive II with a two-speed PTU and low range.

For international sales, the 2014 Jeep Cherokee will have both left- and right-hand drive and will include a diesel powertrain option. Along with the all-new Cherokee, Jeep will also be premiering the 2014 Jeep Grand Cherokee and the Jeep Wrangler Rubicon 10th Anniversary Edition.