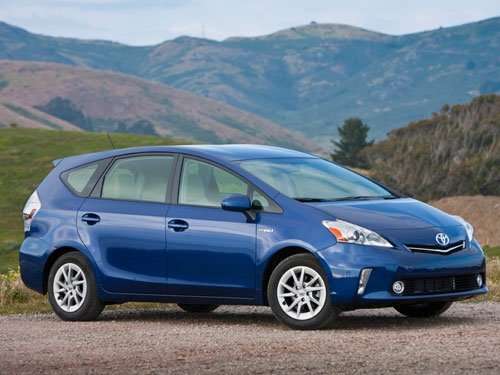 Using the EPA's combined cycle miles per gallon ratings, we look at the most fuel efficient cars available to young families today for under $30,000.
Advertisement

Anyone who's undergone the lifestyle change that having children creates understands that three things are certain when a couple transforms themselves into parents. First, kids are expensive. Second, they require parents to make a lot of sacrificial changes. Third, you'll need a bigger car.

Back in the day when my own parents first married, my dad celebrated the event by spending most of his life savings (about $3,600) on a brand new 1961 Chevrolet Bel Air 4-door in two-tone paint and with optional 2-speaker radio (one in front, one in back) and dash-mounted heater. That car stayed in the family until just a couple of years ago. I fondly remember driving it many times (up until I got into an accident, which ended my Bel Air privileges - and rightly so, I admit). So my parents were the proud owners of what by today's standards is the equivalent of the common minivan in size and roominess.

A year or so later, my older brother was born. That event completely changed my parent's lives, as having children tends to do, and my dad, being pragmatic and forward-thinking, decided that the Bel Air was too cramped for the three of them. Especially since it was likely that three would eventually become four, maybe five or six. So he gave the Bel Air to his mother (as any good son would) and bought one of the era's greatest triumphs: a station wagon. I personally never saw that wagon, since I wasn't to be born for nearly a decade, but by pictorial accounts, it was the largest land yacht that Detroit had to offer. It was eventually replaced by its predecessor, a car I remember from childhood fondly, another Buick Wagon of Doom.

Today, things are a bit different. The cars (and their driveway displacements) have changed: most singles or newly-married couples are driving compacts or even sub-compacts like Toyota's Scion line or the tiny Nissan, Ford, Chevrolet, or any other car maker's c-segments. What hasn't changed is the need (or perceived need, depending on who you ask) for more room once children enter the picture and the fact that young budgets are nearly always strained when that upgrade is needed.

Strained budgets mean: low price points, low cost of ownership, but without losing versatility. A car under $30,000 is considered by the auto industry to be acceptable, in terms of likely monthly payments, for most low- and mid-level incomes. Cost of ownership is largely a factor of fuel economy and costs. Versatility is the ability to seat 5 (realistically) - or carry two baby/booster safety seats plus groceries. Most mid-sized sedans, hatchbacks and wagons meet those criteria for most people.

Using the EPA's fuel economy guide as our measure, along with the MSRP for the entry level trim for the car as our buy price, here's a list of the top 5 family fuel sipper sedans in the 2012 models:

#5 - Volkswagen Passat TDI (35mpg combined)
This diesel has undergone a lot of reform in this newly-minted design for the popular sedan. Everything from its American-specific design changes (including a larger interior) to its assembly taking place in Tennessee has changed the way VW diesels are being seen in this country. The impressive MPG is available in the standard transmission option and drops slightly with the automatic.

#4 - Ford Fusion Hybrid (39mpg combined)
Touted as the highest-economy mid-sized sedan on the market, the Fusion has become Ford's flagship hybrid showcase. It's well-appointed at a good price point, but does suffer from some cargo room deficiencies due to the layout of the batteries, which are behind the rear seats, preventing them from folding as is traditional in small- and mid-sized sedans.

#3 - Toyota Camry Hybrid (41mpg combined)
Just looking at Camry's parked in a lot, you wouldn't easily be able to tell a hybrid from its gasoline-only siblings, but once you drive it and visit the pumps a few times, the difference will be stark. The 2012 model is larger and better equipped than its 2011 parents as well.

#2 - Toyota Prius v (42mpg combined)
Coming in just slightly cheaper than the Camry, the Prius v is both roomier and more restrictive, depending on your point of view. It sports more cargo space, but isn't quite as peppy as the Camry, with a smaller drive train (dropping about 66 horsepower). Of the cars on our list, however, it is the largest in terms of total interior space.

#1 - Toyota Prius (50mpg combined)
The hybrid that started it all for Toyota, the venerable Prius is still its top of the line fuel sipper with enough room for most needs. On our list, however, it is also the smallest in terms of interior room and storage.

It should have been obvious that hybrids would dominate, and when you talk about hybrids, you invariably end up talking about Toyota. Regardless, if you're looking for today's entry-level family cruiser that's easy on the budget at the pump, this list should get you started.

Tesla Giga Berlin's New Hurdle: It's Not Only the Gov't, but Now Tesla Itself
Teslas Are Sold Out Until 2023, But The Timing May Reverse
END_OF_DOCUMENT_TOKEN_TO_BE_REPLACED