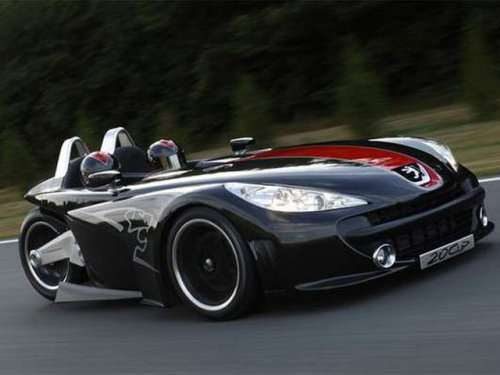 3-Wheeled cars will always be cool

Whether you call them "trikes," "3-wheelers," or "tadpoles" you gotta love 3-wheeled cars. Here's a rundown of some of the best machines in automotive history.
Advertisement

Throughout automotive history, no general theme that fundamentally changes the chassis of the vehicle has been more recurrent than 3-wheeled autos. Whether it be a "trike" (two wheels in back, one in front) or "tadpole" (two wheels in front, one in back), the 3-wheeler has fascinated home builders and efficiency engineers since the first horseless carriage bumped down the road.

A three wheeled automobile has several advantages over its more common four wheeled brethren. It's inherently more efficient because it has less rubber on the road (which means lower rolling resistance) and because the triangular shape of a 3-wheeled car is more apt to be aerodynamic as well.

The chief disadvantages to a 3-wheeler are stability and interior space, which are usually compromised because of the design. Stability is largely restored with the change to a tadpole shape, since the most unstable part of a 3-wheeled drive is turning and the tadpole puts both wheels up front where the side-tilting forces usually are during a turn. Interior space constraints have also made for some creativity on the part of designers with interesting seating arrangements and cargo access being the result.

Karl Benz, whose name now adorns the Mercedes-Benz name, was not just the pioneer of gasoline-powered cars, he was also a prolific automotive designer and his very first purpose-built automobile was the Benz Patent Motorwagen, built in 1885. It was a tricycle configuration, open-air carriage car.

Following on Benz, several designs for 3-wheeled cars came and went. One of the more famous was the Swiss-made Egg & Egli Rapid at the turn of the century, built on knowledge gained from the earlier Tricycle.

Meanwhile, in England, the Morgan Motor Company was busy building cars. A series of V-Twin and F-Series three wheelers were produced from about 1911 to 1952 including the very famous and well-loved Aero 2-seater Sports and Super Sports models of the 1920s and 30s.

On this side of the pond, Buckminster Fuller was gaining headlines with his infamous conceptual the Dymaxion. More a 3-wheeled bus than a car, this huge RV-like ride could seat 11 and got 30 miles to the gallon at a time when less than ten was the norm. Good luck parking this 20-foot beast, though. Blame for the demise of the Dymaxion is as storied and conspiratorial as the Who Killed the Electric Car? controversy.

Where the Dymaxion made headlines for both innovation and destruction, the British-market BMW Isetta was made famous as one of the iconic cars of the UK by Hollywood. The Isetta was an innovative idea, with its front end opening entirely to allow entry into the tiny 2-seater. It's one of the most collected cars in history.

Where the Isetta made glitz, the Reliant Regal made guffaws. Hugely popular as a working man's car, the Regal began production in 1953 and ran until 1973 and, like the Isetta, took advantage of tax and licensing breaks intended for motorcycles in the UK. The pictured 3/25 from 1964 in our gallery is similar to the one made famous in the Mr. Bean television series.

Contemporary to the Isetta and Regal was the oft-giggled little Peel P50, the smallest production car ever made. Resembling a child's toy more than a car, the P50 had a one-seat compartment and wheelbarrow wheel-like tires. Built on the Isle of Man, the car was marketed in 1963 for the equivalent of $2,200 today. A revitalized version of the car was produced in 2010 in England with an electric motor and other updates, though it wasn't road legal.

The Bond Bug is one of the more infamous of 3-wheeled trikes to enter production, being billed as a sports car for Britains. The 2-seat car started production in 1970 with a 700cc front-mounted engine and sped through until 1974 when the lift-top car stopped production at 2,270 units. It's one of the most collected British cars of the 1970s.

Jumping forward to the 1990s, the Campagna T-Rex started production in 1996 and is still being produced in Canada. This car seats two and has the honor of being the fastest production 3-wheeler at 157mph. It retails for a balmy $50,000 or so.

In 2006, an American company called ZAP began production of the Xebra tricycle electric car. In American minds, it became one of the more ubiquitous of the 3-wheelers produced here with a 5-door car and 2-door pickup truck being produced until 2009. While the company was based in the U.S., the Xebra was actually built in China and has the distinction of the being the first Chinese-made car to be imported to the States.

Another current tadpole is the Myers Motors NmG (No More Gas) which is the current version of the Corbin Sparrow single-passenger battery-electric car. The shoe-shaped NmG has a range of about 30 miles and a top speed of 70mph.

The now-defunct Aptera 2 series of 3-wheeled cars were meant to take over the world with their appealing aircraft-like design and high efficiency. Troubles at the Aptera company caused it to close its doors last year even after a popular review from Jay Leno gave the car a big endorsement. Another company is attempting to revitalize the electric version of the Aptera.

Designs based on the 3-wheeled concept are continually being produced. Pictured above is a concept from Peugeot called the 20Cup. Our gallery also includes the Honda 3R-C concept. It's clear that the idea of a 3-wheeler is not going away and some day, these cars could become common on our roadways as their benefits become popularized.