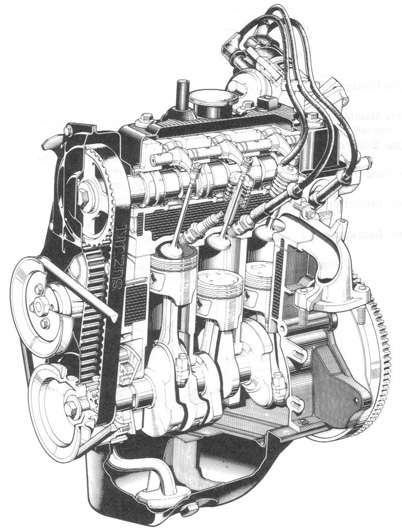 Now that 40mpg highway has become the norm in compact cars, automakers are pushing towards making that 50mpg, and are beginning to achieve that in Europe by downsizing engines without downsizing performance.
Advertisement

Five years ago, an automaker announcing a new 3-cylinder engine design was tantamount to declaring its own bankruptcy - a sure way to destroy credibility and public relations. My how times have changed.

Far from the "Yugo Nowhere II" jokes of yesterday, the 3-cylinder powerhouse has become the next big thing. As auto manufactures look for ways to meet or beat European and new American fuel economy requirements, they are downsizing. Dropping another cylinder is just another step towards better economy. The trick is, as it has always been, to keep performance up.

In the 1940s, any car with fewer than 12 cylinders was considered "underpowered." In the '50s and '60s, the V8 was king and anything with fewer cylinders was weak. In the 1970's and 1980's, the 6 ruled the highway and then, thanks in no small part to Japanese influence, powerful little 4-cylinder engines started displacing those 6's. Along with those cylinders dropping was a corresponding rise in fuel economy as it grew from single digits to be measured in the tens, twenties, and, now, heading towards the mid-century mark.

Pictured here is one of the first entries into the new 3-cylinder revolution, a Suzuki F8B, which debuted in 1981 in the company's Alto vehicles and was rebadged in 1991 as a Chevrolet CMV/CMP for Daewoo. It's a 796cc / 48.6 cubic inch engine that has evolved to do remarkably well in the small cars it powers. In foreign markets, the 3-cylinder has gained wide acceptance, but in Europe and the U.S., it's only just beginning to be seen as viable.

Ford and Mitsubishi plan to launch small cars powered by 3-cyl engines in North America starting next year. While previous entries into the American market with these little engines have met with lackluster sales and a lot of bad press, well.. times, they are a changin. Far from the puttering Geo Metro and Suzuki Swift of the 1990s or even the underperforming Smart ForTwo of more recent fame, the engines coming in at 3-cylinders now are packing a lot more punch.

Ford's 1.0-liter EcoBoost 3-cylinder engine is the smallest the company has ever built for use in a car, but packs 100+ horsepower of muscle and is currently selling well despite the $400USD premium it has over the 4-cylinder option in Britain's Focus model. Ford says the output of the little engine is equivalent to what many 1.6-liter 4-bangers are getting now. Except with much better mileage numbers.

That car and engine are on their way to Ford's Dearborn HQ in Michigan to undergo testing for this market, starting next month. Engineers and marketing teams will evaluate what changes might be needed to make it more appealing to the U.S. market.

That's nothing, though. Ford, BMW, and others are working on 3-pops with better than 150 horsepower. Until then, many companies are resorting to audio tricks to create a larger engine sound to soothe power-hungry American drivers. Ford's Lincoln division has been using the internal audio in the cabin to enhance engine sounds in their larger vehicles for some time and BMW has followed suit in some of theirs.

Meanwhile, several other companies, including Suzuki, have been plugging along with their 3-cylinder designs and may soon bring some of their variants to the Americas as well. It's truly a revolution in the making.

Prathith shetty wrote on June 15, 2015 - 7:13am Permalink
Your analysis truely reflects the present trend and success.