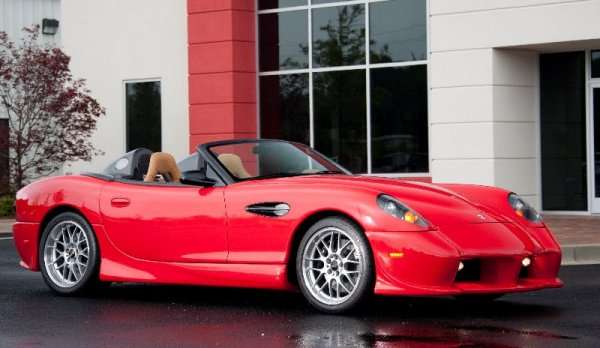 One of the most exclusive supercars ever made is built in Georgia here in the U.S. and has a name so funny-sounding that only the highest dollar figures can smooth it over. 25 years after the first one debuted, an anniversary edition is revealed.
Advertisement

The most exclusive, American-made supercar you've never heard of first appeared in 1992 as the Panoz Roadster. The Georgia-based manufacturer was the first to use super-formed aluminum panels on that 1992 Panoz Roadster, whose body design is reminiscent of both the fluid Aston Martins and the road-going Ferraris of that period.

Aluminum was the rage at that time, and the Panoz showcased a lot of it. Besides the body panels, most of the chassis, modular V8 engine, and more were also in the makeup of this car. It was the first American-made Aluminum Intensive Vehicle.

Fast-forward 25 years to today and the company is introducing a new version of that car in an extremely limited edition model that will debut at the Gordon McCall Motorworks Revival as part of Monterey Car Week. The official unveil will be August 13.

The 2015 Panoz 25th Anniversary Edition Esperante Spyder combines all of the elements a supercar needs: a long name, Latin-based nomenclature, an exclusive nature (only 25 to be made!), low-digit 0-60 times (3.7 seconds, GT option), and a price tag to match all of that ($179,120 to start).

All of that is in a beautiful package, though. This lovely sports car features heavy use of aluminum and carbon fiber, giving it a curb weight of only 3,128 pounds. The car's 3.7-second 0-60 mph time is coupled to a top speed of 172 mph and a quarter-mile time of 12.5 seconds at 112 mph in the GT. This is in the mid-end version, of course. There are actually three powertrain options for the Panoz.

The 430 horsepower V8 base option is putting out those horses naturally while the same engine with superchargers (aka the "GT") bumps to 560 horses. Both of these engines mate to a Tremec T56 Magnum six-speed manual transmission with a six-speed automatic as an option. If none of that is good enough, an Elan Power Products over-charged, custom engine option producing 800 horsepower can be had. This way you can win the bragging rights competition with Hellcat owners. Specs for that Elan are being withheld until the car's debut next week.

Pricing for the naturally-aspirated Esperante from Paroz begins at $179,120, plus destination, while the Spyder GT version jumps to $204,750. 25 in total will be made to order and order banks open with the car's physical debut next week.