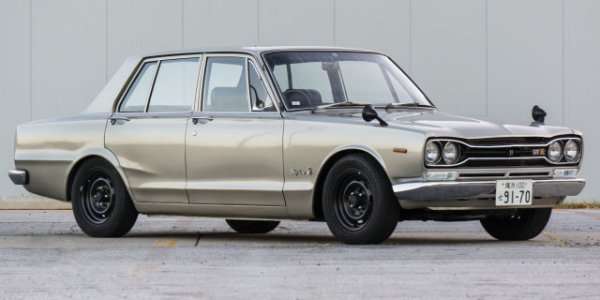 The amazing thing is, this won't be the first time that a Skyline of that generation has netted over six figures.
Advertisement

Back in the day, the Skyline was the Japanese sports car to get. Like today's GT-R, the 1970s Skyline GT-R was the premier Nipponese muscle car of its day. This particular one sports 170 horsepower from a 1,989cc dual overhad camshaft, 24-valve S20 inline six-cylinder engine with three Mikuni-Solex N40PHH side-draft carburetors.

This forerunner for the Godzilla is the third-generation of the GT-R sedan, whose engine is race-derived and whose name carries fifty overall victories on the Japanese circuit. This particular car is a 1970 Skyline 2000 GT-R Hakosuka and will be auctioned by RM Auctions in Arizona. Although there is no reserve, the GT-R Hakosuka is expected to pull between $100,000 and $150,000.

"Hakosuka" (Hak-OH-skaa) means "Boxy Skyline" and this generation of the car was introduced in 1968 and was based on the earlier Prince designs, but with the merger with Nissan was given a 2000GT flair, including the triple-carb engine from the 2000GT-X. This was the first car to bear the GT-R name.

This particular car was restored in Japan from what the restorer says was an excellent example to begin with. It was then imported to the United States by a collector in 2010 with 55,300 kilometers on the dial. In April of 2012, It now has just 58,200 km on the odometer, meaning it's had only about 3,000 km put on it since its engine rebuild and light restoration.

For reference, a previous GT-R, of the fourth-generation, a 1972 Skyline GT-R Coupe, sold at RM Auctions for $242,000. To see the first GT-R come up for auction is even more rare, since they were never sold outside of Japan and are an unusual sight even in that country.