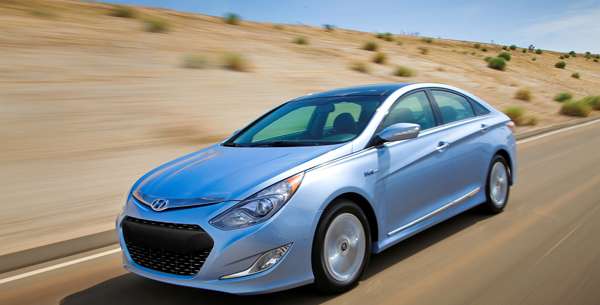 It's a question that must be on a lot of folks' mind: if the 2014 Hyundai Sonata gets an improved powertrain for 2014, why isn't it more fuel efficient? The answer may surprise you.
Advertisement

According to a press release from Hyundai, "The Hybrid Blue Drive system is paired with a 2.4-liter Theta II four-cylinder engine that efficiently runs on an Atkinson cycle and six-speed hybrid automatic transmission to generate 199 combined net horsepower. This advanced powertrain maintains the improved fuel efficiencies of the Sonata Hybrid by increasing the overall amount of available electrical drive power, allowing drivers to go further between fill ups."

In other words, Hyundai has improved the 2014 Sonata Hybrid to run further on just electricity alone. And, what continues to be a cool thing about this particular hybrid, the electric power comes on at highway speeds when it is actually most needed based on the driving habits of typical Americans who spend more time cruising the interstates than ambling down boulevards.

The 2013 and 2014 models are both rated at 36-mpg city and 40-mpg highway. Yes, that's right, the fuel economy numbers for this hybrid are atypically better on the highway.

But how can it be that the fuel economy numbers are the same? After all, with more electric cruising distance, the numbers should favor the 2014 model.

Well they should and probably do but not based on the formula the EPA uses to measure fuel economy. Automakers can't use optimistic sets of numbers that presume owners know how to drive their cars correctly. They have to rely on what could best be termed the Gloomy Gus numbers.

Those numbers, in effect, say the average driver isn't capable of achieving fuel-efficient skills. So, the EPA makes automakers dumb down the fuel economy numbers.

But, if you were to drive them back-to-back, odds are good your fuel numbers would be much better with the 2014 Hyundai Sonata Hybrid.