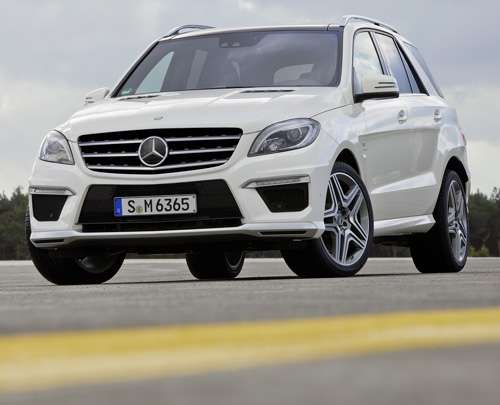 At this week's Los Angeles Auto Show, Mercedes-Benz will unveil its high performance, more fuel efficient ML63 AMG with an announcement that includes tantalizing details like a top speed of 174 mph and 550 horsepower of performance.
Advertisement

It's a changing world we live in, thought, when the very first detail Mercedes-Benz announces about the high-performance ML63 AMG, an SUV with a strong emphasis on sport, is its fuel economy. The 2012 ML63 AMG gets an estimated combined fuel economy of 16 mpg, which is a 33 percent improvement over the last ML63 AMG.

Now that we have made the green movement happy, it's time to focus on what makes the 2012 Mercedes ML63 AMG so damn exciting: its raw power. Under the hood lies the AMG 5.5-liter V8 biturbo engine with an output of 518 hp and torque of 516 lb-ft, representing an increase of 15 hp and 44 lb-ft over its predecessor.

Does that not quite whet your need for speed? Is that much power just a little slow for you? Well, add on the performance package and the engine's output jumps to 550 horsepower and a maximum torque of 560 lb. ft. Top speed goes from the traditional German limit of 155 mph up to 174 mph and the 0-60 time drops from 4.7 seconds to 4.6 seconds.

Mercedes-Benz is also touting the active curve system, which is available on the stock ML350 that puts out (yawn) only 302 horsepower and 270 lb. ft. of torque. Active curve system compensates for the roll angle of the body through turns, delivering improvement in both agility and driving pleasure (as I witnessed first-hand on an off-road course in Montana). At the same time the system increases driving stability and thus safety, especially at high speeds. Improved ride comfort both on winding stretches of road and on straight highways, together with enhanced options for off-road driving, are also among the benefits of the active curve system.

The AMG 5.5-liter V8 biturbo engine features spray-guided gasoline direct injection with piezo injectors, ECO stop/start system, an all-aluminum crankcase, four valves per cylinder with camshaft adjustment, air-to-water charge air cooling and efficient alternator management. With a displacement of 5461 cc, the eight-cylinder engine generates a maximum power output of 518 hp and 516 lb-ft of torque. Combined with the AMG Performance Package, these values rise to 550 hp and 560 lb-ft. This difference in power and torque results from an increase in the maximum charge pressure from 14.0 to 18.8 psi.

Power delivery to all four permanently driven wheels is from the AMG Speedshift Plus 7-speed automatic transmission. Don't whine about the absence of a manual transmission. The shifter in the ML63 is going to do a better job than 99.5% of all drivers.

It features three driving programs and a rev-matching function for downshifting. In "Controlled Efficiency" mode (C) the ECO stop/start function is active, shutting down the eight-cylinder engine when the vehicle is stationary. The "C" mode also delivers smoother acceleration and transmission characteristics with comfortable, earlier gear changes. Pulling away in this mode usually begins in second gear. A green "ECO" symbol in the AMG instrument cluster indicates that the ECO stop/start function is active. This is a mode probably no owner will ever intentionally use.

In the Sport (S) and Manual (M) driving programs the ECO stop/start function is inactive and the engine/transmission characteristics are more agile. A brief and precisely defined retardation of ignition and injection during upshift at full load also delivers shorter shift times. This is a mode most AMG owners will intentionally use.

The AMG Performance Package also includes an engine cover in high-quality genuine carbon fiber, calipers painted in red and the AMG Performance steering wheel in Premium leather/DINAMICA. Just so the world can know exactly what is flying down the road or being parked in front at the valet stand.

Ready to place your order? The high performance sport ute hits dealer showrooms in the first quarter of 2012.