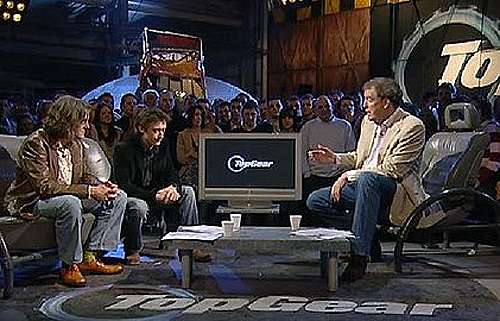 Want to know the worst car show on television tonight, Jan. 2, 2012? Nope, it's not Top Gear USA (which seems to have disappeared from broadcast as far as my DVR can tell.) Nor is it the lazily named Car Show on SpeedTV.
Advertisement

Right now the worst car show on television is Top Gear. Yes, I'm referring to the BBC 2 version. It's horrible. It's almost painful to watch how bad Jeremy Clarkson, Richard Hammond and James May. They managed to make the BMW 5 series, Ford GT, and Porsche 911 uninspired and a bit with The Stig hurtling off the HMS Invincible was just dumb.

Of course I'm not talking about the current season of Top Gear, widely available via peer-to-peer file sharing. I'm talking about the second season (ed.note it was actually the third season or series as it is called in Britain). The one show I watched was so bad I deleted the second episode without watching it (well somewhat accidentally).

As I sat and watched this nightmare of an episode all I could think was, "Top Gear USA was never this bad." Clarkson came off as a rich snob casually talking about spending $200,000 to buy a car. The jokes fell flat with the in-studio audience.

You know the most surprising thing? James May (aka Captain Slow) was the most polished of the lot. Richard Hammond (the Hamster) was almost squeaky in his exuberance. Fortunately his presentation has matured and his voice has deepened to be the polished performer he is today.

The star in the reasonably priced car, a British actor/singer named Martin Kemp, was almost fawned over by Clarkson. The man was an insufferable boor who has owned lots of Porsches and other cars he can't be bothered to remember the names of. Clarkson in 2009 would have slayed him and instead just kissed up. It was painful. It reminded me of Buzz Aldrin's appearance on Top Gear USA.

There was a discernible lack of chemistry among the three hosts. Richard and James seemed the most comfortable and Clarkson kind of like the outsider. He seemed almost tolerated by his castmates. The banter was dry or painful (don't get me started on the golden cock). Interaction with the studio audience was not the inspired back and forth it is today.

The whole story with The Stig driving off the HMS Invincible was probably not totally pointless. If memory serves me correctly (and I probably should have checked Wikipedia), I think the Black Stig was probably replaced with the first White Stig after this episode in the second season (ed. note - again, it appears to be a third season episode).

The worst part of this "Lost Season" as BBC America is billing it? (It should have stayed lost.) The camera work that has grown to become brilliant was lackluster and the editing was bad, too. I think at one point the camera lens for the Ford GT segment shot in Detroit was even dirty. I was just aghast.

So, the next time some self-important critic deigns to criticize Top Gear USA or The Car Show (which I have never seen because I don't get Speed TV), I can now say with confidence that Top Gear in the second season of the reincarnated version was horrible. I'm glad the show prospered in spite of itself and became the gem it is.

Even though there has been a nattering of criticism lately, by the show's own producer, that the three hosts are becoming caricatures of themselves. Well, even so, it had a few great seasons (say Series 4 to 15) that were just brilliant.

Anybody know when Top Gear USA returns? Unlike other self-important critics, I kind of miss it.