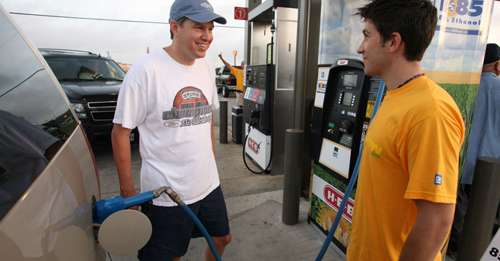 The rising price of gas has resurrected a common miscreant from the oil embargo of the 1970s: gasoline thieves who drain gas tanks but the modern thieves are drilling holes in tanks to steal fuel.
Advertisement

Unlike the gas thieves of the past who would siphon fuel from your tanks with rubber hoses, the modern-day gas thieves are striking by drilling holes in gas tanks and then letting the increasingly expensive gas (close to $4 in some parts) pour into containers. It's not so much the value of the stolen gas, which is usually going to be less than $100, it's the damage being done to the tanks.

According to a report by WBTV in Fort Mill, S.C., the gas thieves are causing hundreds of dollars in damage to the gas tanks of unsuspecting owners. One woman called the cops on Valentine's Day to report as she was filling her pickup, she noticed gas was coming out as fast as she was pumping it in. She took the truck to a repair shop and they advised her it appeared someone drilled a hole in the tank. At least five car owners have fallen prey and the cheapest repair bill has been $1000.

In addition, it plays havoc to run an engine with no gasoline in it. Odds are because of a reservoir in the engine, a vehicle with a drained gas tank will start but then it can seize various parts as things run dry. You're looking at a gas tank and engine repair.

Then there's the potential safety hazard. The woman above had gas pouring on the ground around her that could have easily ignited if she was talking on her cell phone or somebody was smoking nearby.

It's tough to engender sympathy for the criminal masterminds stealing the gas, but they are also putting themselves at risk. As any mechanic will tell you, it's not full gas tanks that scare them to work on, it's near-empty ones. Sticking a drill in an almost-empty tank could create a combustible spark that could quickly incinerate the thief and the vehicle. (Mechanics will thoroughly flush a tank when working on it to avoid the risk of gas fumes igniting.)

Now, it's only natural evolution if a criminal blows himself up while stealing your gas but you're still without a vehicle in the meantime. Speaking of evolution, today's gas thieves are somewhat smarter than those from 30-plus years ago who would siphon gas by sticking a long rubber tube into your gas tank, inhaling as hard as they could, and drawing the pump through the hose and into their container.

The problem was it was a difficult technique to master and led to emergency-room cases of would-be thieves with stomachs soaked in gasoline. (Again, tough to feel sorry for them but odds are they were uninsured and taxpayers ended up footing the bill.)

It was these sucking thieves who led to the mass-production of locking gas caps or internal levers behind locked car doors to open the gas tank. Locking gas caps quickly fell out of favor when owners started losing the keys – and would run out of gas.

You can't lock an entire gas tank but there are certain steps you can take to lessen your chances of being a victim.

If you're a victim of this kind of theft, make sure police are encouraged to treat this as a serious crime and not just the theft of less than $100 in fuel, which is a misdemeanor. They need to know how much damage has been caused to the vehicle and treat it as a break-in to your car.

Also, keep in mind if you approach your car and there is a smell of gas or unexplained puddles around your car, you will need to see if your gas tank is dripping. It's going to involve getting down on your hands and knees to find out if thieves have ripped you off by drilling a hole in your gas tank. Call for a tow truck and advise them of what has happened so the driver can safely secure your vehicle and tow it.

Anonymous wrote on May 28, 2011 - 1:24am Permalink
Yeah ok there Einstein, running a car our of gas will harm the engine? Did you think that one up all by yourself? Absolutely frickin ridiculous, almost never happens. I have been a mechanic 25 years and have never seen it. You might wear your fuel pump out prematurely if you run out multiple times, but it still is not engine damage. You have no business posting automotive info here. You folks that read this crapola, my suggestion is disregard all of it.
Anonymous wrote on February 25, 2012 - 3:28pm Permalink
this just happened to one of our company vans. sucks
Anonymous wrote on February 25, 2012 - 3:29pm Permalink
this just happened to one of our company vans. sucks
AdrianS1983 wrote on June 8, 2011 - 11:36am Permalink
While the hazard to your health and the health of the thief is a noble cause (pardon my sarcasm), fuel theft is incredibly harmful to the bottom line of any business that uses vehicles or machinery. Fuel locks only make the thief use more invasive methods like those described above. To find out more about fuel theft, visit http://www.stop-fuel-theft.net/ Adrian
Anonymous wrote on October 1, 2012 - 9:10pm Permalink
This just happened to our 4X4 diesel truck, last night 9/30/12. I know that a car running out of gas is frustrating and can cause damage to the fuel pumps, filter etc. However the danger is more serious to a deisel. Our vehicle was parked in a well lit area...I guess we just helped by giving them some light to do their damage. A Tank for our truck is $700.00, not to mention the labor, and $120.00 in fuel cost. Plus both us down one day from work to call police and insurance, and wait for tow as well as getting a rental car. We are in California so the EPA demands that the fire department is dispatched first for any leaking fuel, before it can be towed or moved and before police will come make a report. Does anyone know of some kind of plate or something to place under the vehicle to at least deture this kind of activity from happening?