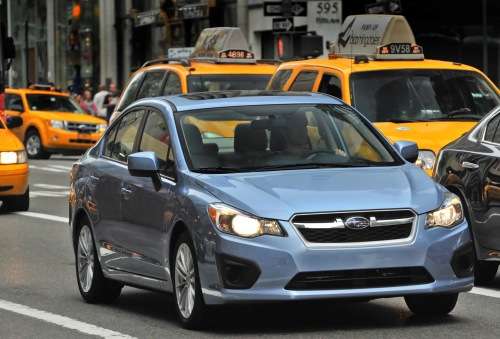 The fourth-generation 2012 Subaru Impreza has been unveiled with extensive details, including pricing, to the automotive media on Manhattan’s west side, just blocks away from its initial introduction at the New York Auto Show in April.
Advertisement

Driving impressions of the 2012 Subaru Impreza are embargoed until Monday, Oct. 3rd. Subaru will let automotive journalists drive the Impreza today from Manhattan north to the Berkshires in Massachusetts, finally ending up on the campus of Yale in New Haven, Conn.

Akihide Takeuchi, project general manager, has the unique perspective of working on both the third generation Subaru Impreza and the current 2012 model. He said Subaru recognized deficiencies in the Impreza that were addressed: styling and fuel efficiency. “We want enhancements to be visible to our customers,” he said.

Impreza is going to be offered in all-wheel drive in both the four-door sedan and five-door hatchback trim levels. The most staggering detail of the Impreza is its fuel economy: 36-mpg highway and 27-mpg city for a combined rating of 30 mpg overall. As Subaru points out, it gets better city fuel economy than the much smaller Fiat 500. The 2012 Subaru Impreza is the most fuel-efficient all-wheel drive on the market including smaller vehicles like the Suzuki SX4.

Cruising range for the Subaru Impreza is 523 miles, up 67 miles from the 2011 Impreza, in spite of a smaller gas tank. That gives the current Impreza a better range than the Chevrolet Cruze, Honda Civic, Mazda3 and Hyundai Elantra – none of which offer all-wheel drive.

Subaru Impreza is going to be initially powered by the 2.0-liter engine first introduced in the 2011 Subaru Forrester. It was Subaru’s first new engine in 20 years. Subaru says it has contributed to a 10 percent enhancement in fuel efficiency with better acceleration.

OK, so the Subaru Impreza is never going to be accused of being a sports sedan but it at long last has a 0-60 time in the single digits – just barely. Subaru said the 2012 Impreza with a continuously variable transmission designed for the Impreza can jump to 60 in 9.8 seconds, an improvement from the previous 10.3 seconds. (Subaru said it has not tested the five-speed manual.) The 2.0-liter engine is rated at 148 horsepower at 6200 rpm and 145 lb. ft. of torque at 4200 rpm.

On the styling front, Subaru has moved the A-pillar (where the windshield meets the side of your vehicle) forward eight inches. The hood is shorter and the wheelbase is one-inch longer, which contributes to the rear legroom increasing two inches (thanks to scalloped front seats that add another inch). The door openings are also wider for easier entry and exit, as well as making it simpler to load cargo in the backseat (such as televisions). The shoulder line has also been lowered for better visibility.

Takeuchi addressed what has become common wisdom in the industry, “Compact cars with convenient body sizes and fuel efficiency have gained traction in this economy,” he said.

Subaru admitted something few manufacturers do – it is targeting older customers with the 2012 Impreza. Companies like Scion claim they’re going for the hip, twenty-somethings but end up selling a greater percentage of their vehicles to AARP members. Subaru still claims Generation Y and the Millennials will buy the Impreza but it’s refreshing to see a company admit older consumers exist.

Back on the technical side, the 2012 Subaru Impreza comes with four-wheel disc brakes with return springs added to the front brake pads for drag reduction. The vehicle also has brake override to prevent unintended acceleration. The roof crush strength rating is four times the vehicle’s weight, which is better than the federal standards of three times a vehicle’s weight. Also on the safety front, driver’s side knee airbags have been added.

Anonymous wrote on September 27, 2011 - 12:26pm Permalink
Where is the "Stop / Start" technology introduced in Subaru XV which is based on Impreza? How about direct fuel injection? These two features combine would add another 20% in fuel saving?
Michael Price wrote on September 29, 2011 - 9:02am Permalink
You state that the Impreza will be powered by the 2.0 liter engine first introduced in the 2011 Forester, however the Forester only offers a 2.5 though both the 2.0 and 2.5 share the new "fb" architecture.
Car guy wrote on October 1, 2011 - 9:12pm Permalink
Is Subaru getting in the premium car market with the 2012 Impreza? The price of $22,595 is kind of already in the premium start level, is it not?
Auto Driver wrote on October 3, 2011 - 2:58pm Permalink
The 2012 Subaru Impreza is a nice little car. One of the few good cars today the price of which starts under 20,000 dollars. It's good to see that the automaker has addressed some basics of the 2012 Impreza's fuel economy and interior volume that may have led some parents into the dealerships of other car models.
Car guy wrote on October 8, 2011 - 6:55pm Permalink
Has anyone seen all-weather custom embroidered floor mats for Subaru Impreza models? If yes, are they unique to each model or one size fits all? I am thinking about a new custom floor mat for a 2012 Subaru Impreza. By the way what's the price of these mats? Thank you.
DG wrote on October 16, 2011 - 12:59am Permalink
This new "FB" engine definitely needs direct injection, which would add another 3-5 MPGs, as well as offer noticeably better acceleration. It's a no-brainer. My guess is that Subaru decided to wait and add DI as a mid-cycle 'refresh'. In any case, unless someone brings a strong compact AWD diesel offering stateside (like maybe the Mazda CX-5 diesel), this is likely to be my next car. Mr Price, the 2.0 has been available in the Forester from the beginning in other markets. The US Forester will not offer the smaller version because Subaru believes Americans are obsessed with horsepower and thus would not buy such a low-power Forester. Hell, the blogosphere blew up with negativity when the new Impreza (a much smaller/lighter vehicle) was announced with less power than the current model. Generally, Americans still haven't caught up to European and Asian thinking concerning fuel efficiency.