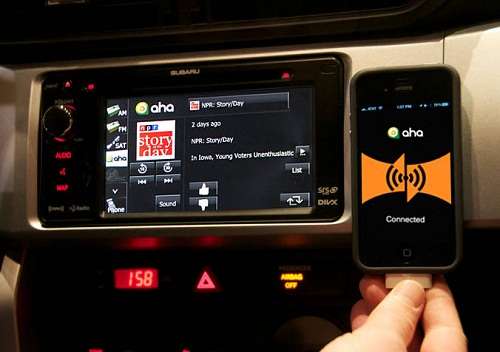 Subaru has an Aha Moment at Consumer Electronics Show

Tonight at a Pepcom event at the MGM Grand in advance of the Consumer Electronics Show in Las Vegas, Subaru had an Aha moment that points to a whole new way of listening to music and surfing the Internet while behind the wheel.
Advertisement

Subaru of America, Inc. and Aha by Harman, the first interactive platform that makes web content safe for drivers, have announced a partnership that will use the Aha platform to bring Web-based content into Subaru vehicles to letting drivers interact with web-based content through their radios. Subaru is one of the first automotive manufacturers to integrate Aha’s service into its vehicles.

Subaru is breaking with the more common choice of Pandora, which has become a top provider of music through smartphones for brands like Hyundai in its new Veloster. Subaru will be demonstrating Aha in its new sports car the BRZ at CES.

The new technology is being called the “fourth band” by Subaru after AM, FM and satellite radio. Offered on future models, Subaru owners will have instant access to tens of thousands of stations of Web-based content such as: on-demand music from MOG® and Rhapsody®; Internet radio from SHOUTcast™, CBS RADIO™, and Slacker®; live news; the latest information, news and entertainment podcasts from NPR® and others; free audio books; personalized traffic reports; Facebook® and Twitter® newsfeeds; personalized restaurant recommendations from Yelp®; and much more. (Free audio books sounds good to those of who spend hours behind the wheel testing new cars.)

Aha’s app for iPhone® integrates with the vehicle, allowing Subaru owners to enjoy Aha while driving. In early 2012, Aha will launch an Android app, which will also integrate with future Subaru vehicles. Users will be able to customize their Aha stations from their iPhone, Android device, or the Web.

“Smartphone activity is at an all-time high and the consumer is looking for a safe interface to interact with the content in their vehicle. Subaru has been evaluating connected car solutions for some time, and Aha is the first product that meets our criteria for safety, great design, and broad content options that can be personalized for each driver,” said David Sullivan, Car Line Manager, Subaru of America, Inc. “Without having to touch their smartphone, Subaru drivers will safely be able to access content like traffic, nearby restaurant information, music, and a growing wealth of web-based information now available through their Subaru optional infotainment system integrated with Aha.”

“Buyers of new Subaru cars will be able to enjoy their favorite Internet content on-demand just as safely as selecting a radio station thanks to Aha,” said Robert Acker, HARMAN VP and General Manager of Aha. “We have built a cloud-based platform that will be continuously updated in the future, so as the Web changes and new services emerge, Subaru drivers will always have access to the most up-to-date content through Aha. With an Aha-enabled radio at their fingertips, Subaru drivers will be among the most well-connected drivers on the road.”

At the 2012 Consumer Electronics Show, booth # CP32 located in the CES central plaza, Aha and Subaru will demonstrate a concept implementation of the integration in a production 2013 Subaru BRZ.

Toyota's First EV Will Have a Name of BZ: Toyota BZ
First Videos From Inside The Boring Company's Las Vegas Loop
END_OF_DOCUMENT_TOKEN_TO_BE_REPLACED