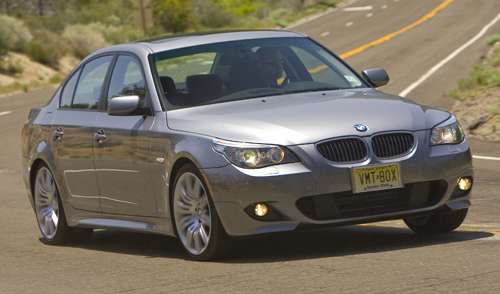 BMW has announced a major recall of 1.3 million of its previous generation 5 and 6 series models for what is potentially a serious problem: an incorrectly mounted battery cable. Recalls because of potential fires has become a major problem for BMW in the last six months.
Advertisement

BMW is claiming "in some remote cases" that the battery cable cover in the trunk may not be mounted properly in this most recent fire related problem. That could result in the electrical system malfunctioning, the vehicle failing to start, and, even worse, starting a fire. The affected vehicles are BMW 5 and 6 series built between 2003 and 2010.

This is being called a "quality measure" by BMW and it probably technically is because it is not a government-mandated recall. That could have been disastrous for BMW because it would have involved a recall notice from the National Highway Transportation Safety Administration and the European New Car Assessment Program (NCAP) as well as safety agencies across the globe.

According to published reports, 367,000 of the vehicles are in the U.S., while 109,000 are reported to be in Britain. (See below for a link to one Londoner who has the right job for a BMW 5 series that might catch on fire.) The breakdown for the remainder of the recalls by country was not readily available.

The good news is it seems to be a relatively simple fix. It should only take 30 minutes at a BMW dealership. Owners will be notified in writing about the recall.

This is not the first fire related recall of BMW vehicles in 2012. Reuters reported that in January BMW had a global recall of 235,500 Mini vehicles, a step taken by the German automaker because electronic circuit boards could overheat and cause a vehicle fire. As with the fire concerns in the BMW 5 and 6 series, "BMW was unaware of accidents and injuries caused by the possible defect."

It is in a manufacturer's best interest to make that statement because it implies no prior knowledge of a problem. In instances where it does know of accidents and injuries, it would be required to report them.

A quick Google search did not show any instances of BMWs that caught fire in their trunks. But one owner might be happy that his employer is the London Fire Brigade. A YouTube video shows him driving his personal BMW 5 series to respond to a call.

In October 2011, the National Highway Transportation Safety Administration also ordered the recall of 32,000 BMWs in the U.S. because of a fire hazard in an electronic circuit board. The affected models, all from the 2008-11 model years, were the 5 Series, 5 Series Gran Turismo, 7 Series, X5 and X6 equipped with turbocharged 8- or 12-cylinder engines.

Francis Dove wrote on March 27, 2012 - 12:15pm Permalink
I am not surprised at the BMW quality issues. Starting with a 1970 navy blue 2002 that when I first cranked open the metal sunroof the paint rolled up I have had poor quality problems with all for I have owned. Of course the second gear synchronizer had to be replaced at 22,000 miles. I foolishly bought a 1973 Bavaria because I liked the way the 2002 handled. I picked it up in Atlanta and headed back to Scott Air Force Base in southern Illinois. At about 150 miles out of Atlanta the light indicating overheating appeared. I had to tow it to St. Louis. Years later I bought a 1977 530i and it blew a head gasket at 300 miles. I had to drive a Mercury Bobcat for nine months. This is the same car as the Ford Pinto. At least the headgasket held up. When I got it back the AC would only cool the car in the winter and the overheating kept indicating the car was running hot. After 6-8 trips they found that the radiator was not grounded properly. I later bought a 1996 530 and the AC went out after 50 miles. It needed $4000 worth of suspension work after 50,000 miles. BMWs are junk! Francis Dove, Major, USAF, Retired