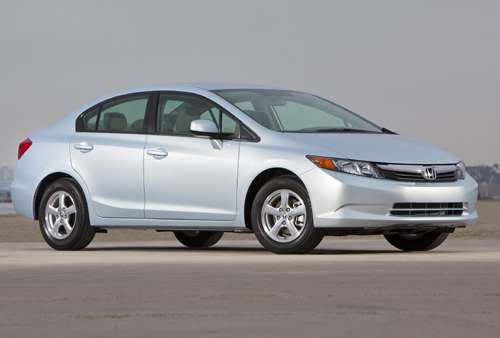 The five finalists for the 2012 Green Car of the Year have been announced with the field reduced to the: 2012 Ford Focus Electric, 2012 Mitsubishi i, the 2012 Honda Civic CNG, the 2012 Volkswagen Passat TDI and the 2012 Toyota Prius V. The winner will be announced at the 2011 Los Angeles Auto Show on Nov. 17.
Advertisement

The Green Car of the Year award is presented by Green Car Journal, which calls itself "the premier source of information on high fuel efficiency, low emission, advanced technology, and alternative fuel vehicles." This will be the seventh year a Green Car is designated.

In a consolation move (and probably to attract advertising dollars), the 2012 Ford Focus Electric, 2012 Mitsubishi i, the 2012 Honda Civic CNG, the 2012 Volkswagen Passat TDI and the 2012 Toyota Prius V are honored as Green Car Journal's Top 5 Green Cars for 2012. That designation should be coming to a marketing campaign near you soon.

Selecting Green Car Finalists
Like other awards, Green Car shoots for vehicles that are perceived as being top in the public's consciousness. After all, what's the point of doing an award for last year's model when you can grab headlines now? The Green Car of the Year award recognizes vehicles that become available by January 1 of the award year. That explains why most mere mortals will not have seen, less likely drive, the eventual winner before it receives its award.

Green Car Journal editors say "literally dozens of models are considered that feature improved environmental impact and increased efficiencies." That brings the mind the old quotation, "Many are considered but few are chosen."

According to the Green Car press release, "Vehicles running on all fuels and technologies weigh in, including high-efficiency gasoline and diesel models along with ones that run on gaseous fuels, electricity and other alternative fuels. Along with quantifiable environmental achievement, market significance and 'newness' are but a few of many criteria considered as the field is narrowed to a final five."

The problem for the Green Car jurors is there is no clear front runner for the award but the edge would have to go to the 2012 Honda Civic CNG, or compressed natural gas, that is being rolled out in November. It is the only vehicle of the five finalists that uses a new form of fuel. Three of the finalists are electric vehicles and the 2012 VW Passat uses diesel, which has been around since the dawn of automotive time. What sets the 2012 model apart is its significantly lower emissions and high mpg rating.

The 2011 Green Car of the Year was the 2011 Chevrolet Volt, which debuted to strong fanfare but unfortunately an unappealing high price. It has faced tough market competition from the 2011 Nissan Leaf, which garnered more awards internationally than the Volt.

What's unusual about the Green Car of the Year jurors is it's not a collection of automotive journalists. The top jurors have some real green credibility in the form of careers in protecting the environment. The addition of Jay Leno might seem like a stunt at first blush but he has extensive automotive knowledge and access to top automotive executives. What Carroll Shelby is doing on a green car panel we're not quite sure.