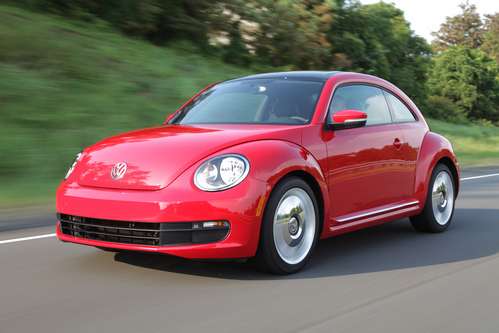 Review: 2012 VW Beetle No Longer a Chick Car; Men Can Like It

Until this year, my admiration for the New Beetle had to kept largely silent because no self-respecting automotive journalist could like this chick car. All that has changed with the 2012 VW Beetle because men can like it, too.
Advertisement

The 2012 Volkswagen Beetle is the redesigned iteration of the classic Beetle. Simply put, Volkswagen has nailed the new design and created a car that either gender could feel happy driving.

Let's face it. The New Beetle, introduced in 1998 was a chick's car in its basic form. I would arm wrestle you to the death that the New Beetle Turbo was enthused with levels of testosterone you wouldn't believe but the New Beetle with its flower vase, round shape, and pastel colors was not a car most men could feel comfortable in.

That's all changed with the 2012 Volkswagen Beetle (which thankfully drops the "new" before its name). The roofline still has a curve to it but it's more subtle and crisp. It has an edge to it that suggests power when standing still instead of looking like a character from a children's cartoon show.

The 2012 Beetle is 71.2 inches wide (3.3 inches wider), 58.5 inches tall (0.5 inches lower) and 168.4 inches long (6.0 inches longer). The development team also increased the car’s track widths and wheelbase. The following sentence from VW is PR hype but I can't disagree with it, "The changed proportions give the Beetle a powerful and dynamic appearance."

It's a squat car but it works from all sides. The only thing I didn't like about it was trying to place a booster seat in the rear. This is not s car for folks with young kids and booster seats. It's also not a car for a tall family. A 6-foot tall dad and his 5'8" tall son are not going to sit back-to-back comfortably.

One vastly needed improvement for the Beetle comes in the trunk. It was an unfriendly space that could be used but only with some contortionism. The new trunk offers 15.5 cubic feet of space that you can actually use. Some trunks have decent cubic space but ridiculously small openings. Another nice touch is the Beetle has a split-folding rear seat to turn it into a hatchback of sorts when the need to move longer items comes along. With the seats down, the capacity is 29.9 cubic feet. For the first time you can also split the rear seats.

Speaking of interior storage space, I wondered why the Beetle had two glove boxes and after reading Volkswagen promotional material I now know. The original Beetle had two with the upper one called the kaeferfach or “Beetle bin." Another classic feature is the optional auxiliary instrumentation package above the audio/navigation system that consists of an oil temperature gauge, a clock with stopwatch function, and a boost pressure gauge.

OK, one last little historical tidbit I never knew (not being much of a Beetle historian). The original model was called the Volkswagen Type 1. It was only later that VW incorporated the nickname the vehicle earned around the world to officially make it the Beetle. It's also the most successful car ever sold on one platform with sales worldwide of more than 21 million.

The 2012 Beetle offers two engines and transmissions: the 2.5-liter five-cylinder engine mated to a six-speed automatic (which is the model VW loaned me for a week) and the 2.0-liter TSI turbocharged four-cylinder engine with the DSG six-speed dual-clutch automatic. (Five-and six-speed manual transmissions will be offered at a later date on the 2.5L and Turbo models respectively.)

I've had the opportunity to drive both models and the Turbo is my choice. The 2012 Volkswagen Beetle is surprisingly fun to drive with plenty of zip but it's the Turbo that's going to leave you smiling. It handled all the twists, curves and straightaways of the Monticello Motor Club with exuberance.

During 2012, the Beetle will become available with Volkswagen’s 2.0¬liter turbocharged inline four-cylinder TDI Clean Diesel engine that produces 140 hp and 236 lb-ft of torque (which will probably be my true first choice). With manufacturer fuel economy estimates of 40 mpg highway, 29 mpg city, and 33 mpg combined, Volkswagen claims this will likely be the most fuel-efficient Beetle ever sold. The TDI will be offered with a six-speed manual transmission and the DSG dual-clutch automatic.

The base 2012 VW Beetle with manual transmission starts at $19,795 for the 2.5-liter engine with five-speed manual transmission. The top of the line model, which includes a navigation system, panoramic sunroof, fantastic Fender audio system and other amenities, tops out at $25,595 with the six-speed automatic. The turbo model starts at $23,395 and tops out at $29,095. All prices are before a $770 destination charge.