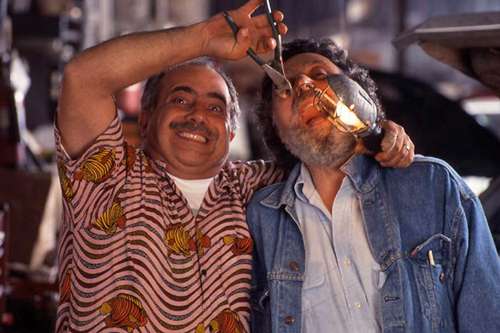 In what was billed as an actual semi-serious note, Ray and Tom Magliazzi, the hosts of Car Talk, have announced no new shows will be produced come October.
Advertisement

On the Car Talk website, Tom and Ray, also known as Click and Clack to their legions of fans, said,

TOM: "with Car Talk celebrating its 25th anniversary on NPR this fall (35th year overall, including our local years at WBUR)…

RAY: …and my brother turning over the birthday odometer to 75, we’ve decided that it’s time to stop and smell the cappuccino.

TOM: So as of October, we’re not going to be recording any more new shows. That’s right, we’re retiring."

I've been fortunate to meet Tom and Ray on numerous occasions through our joint membership in the New England Motor Press Association, where I am currently president. They are two of the nicest guys you'll ever meet and their off-air personalities align perfectly with their on-air banter.

The show will go forward starting October but in a "Best of … " format. NPR will broadcast a newly assembled Car Talk show, selected from the best material in the archives of more than 1200 shows produced over the years.

Ray Magliazzi had this to say on the CarTalk website, "[T]o our fans, don’t be sad. We’ve managed to avoid getting thrown off NPR for 25 years, given out tens of thousands of wrong answers, generated lawsuit threats from innumerable car companies, and had a hell of a lot of fun talking to you guys. [T]hank you for giving us far more of your time than we ever deserved. We love you. And know that starting this fall, for the first time, we’ll be able to sit at home, laughing at Car Talk along with you guys on Saturday mornings."

Tom Magliazzi made it firm there is no going back on this decision. Ray posited this question, "Will we change our minds and come back and do some more shows? I would say it’s unlikely, but anything’s possible. Right, Tommy?" Tom said, "Absolutely not. My brother can go chase himself. I’m done."

The brothers announced plans to keep their website going. They will also continue to produce their weekly newspaper column, co-written with Doug Berman, the executive producer of their radio show.

Not everybody may have been a fan of the show, but I know I'm going to miss listening to the guys on Saturday morning. (It just won't be the same knowing that it's all pre-recorded.) The country is losing out on two originals. Others have tried to copy them but there's been nobody better over the years than Click and Clack. Here's hoping Tom and Ray enjoy many years of good health.

Aaron Turpen wrote on June 8, 2012 - 5:38pm Permalink
Real bummer. One of the few car-related shows I actually enjoyed.
Anonymous wrote on February 23, 2013 - 11:03am Permalink
one of the things made life a joy - listening to tom and ray!!! definitely unique and and made a difference!