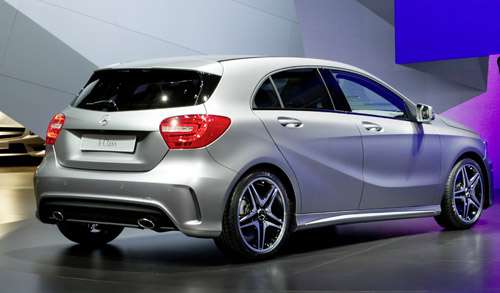 Mercedes-Benz on the Attack with new A-Class at Geneva

Compact cars are suddenly the cool thing in the automotive world as amply demonstrated with Mercedes-Benz's world premiere of the new A-class, which it touted ahead of the new SL63 AMG and the new E 300 BlueTEC hybrid introductions at the Geneva Motor Show.
Advertisement

The A-class is being touted for its low carbon footprint with emission figures starting at 99 g CO2/km. Yet, at the same time it also has performance up to 211 horsepower. No price info has been released yet.

Steve Jobs must be cackling from the hell fires below at the thought that a massive multi-national company has made the iPhone an integral part of its operation. (Trust me – read Jobs' biography. He's burning in hell.)

The driver now has access to the main content of his iPhone with the “Drive Kit Plus for the iPhone” and an app concept developed in-house by Daimler that brings “Digital DriveStyle” into the vehicle. This enables the full range of smartphone capabilities to be used safely and conveniently inside the car, too, for the first time.

All functions of the iPhone integration can be used with the Audio 20 entry device, and will also be available for a wide range of other Mercedes-Benz models as of this summer. Furthermore, Mercedes-Benz will shortly be enabling the in-car use of smartphones with other operating systems.

OK, maybe it's just me and my knowledge of early 20th century world history, but it makes me nervous when a German automaker uses the word "conquest" and says the A in A-class stands for "attack" as Dieter Zetsche, CEO of Daimler AG and Head of Mercedes-Benz Cars, said when introducing the lineup. His statement: “The A-Class makes a clear statement on the new dynamism of Mercedes-Benz. Together with the successful new B-Class and three further model variants based on this vehicle architecture, it will be an important driver in our ‘Mercedes-Benz 2020’ growth strategy. We are expecting a conquest rate of more than 50 percent for the A-Class. And that’s why we say that ‘A’ now stands for attack.”

The new A-Class sits lower to the ground than its predecessor by up to seven inches (more than the length of a dollar bill). Mercedes says, "The radical design language that was introduced with the “Concept A-CLASS” to an enthusiastic reception worldwide has been systematically carried over into series production. With a reinterpretation of the classic two-box design, Mercedes-Benz designers created an emotional exterior with an extremely sporty character. And with a cd figure starting from 0.26, the A-Class sets a new benchmark in its class."

A wide range of spark-ignition and diesel engines fulfils every performance desire and, at the same time, marks the current state-of-the-art in efficiency – for the first time, a Mercedes-Benz with an internal combustion engine will emit just 99 g CO2 per kilometer. (Sorry – my basic math skills fail me and I can't make the computation to miles in this instance.) The output spectrum ranges from 109 horsepower for the entry-level diesel through to 211 horsepower for the new 2.0-litre petrol version.

According to published reports, the A class will be coming to the U.S. in 2013 because other small models need to be introduced first. Call it an educated guess but don't expect to see the small diesel engine among the early offerings (if ever). The 211 horsepower should definitely show itself in the U.S.

Mercedes-Benz is introducing an innovation in the 1.6-liter gas engine in the shape of CAMTRONIC – by adjusting valve lift on the inlet side, the volume of fresh air is restricted under partial load and fuel consumption reduced. All six engines are equipped as standard with direct injection and the ECO start/stop function. As an option, they can be combined with the 7G-DCT dual-clutch automatic.

At the same time, the A-Class provides impressive proof that safety is not a question of price at Mercedes-Benz – the radar-based Collision Prevention Assist system and Attention Assist are part of the standard equipment. Well-known safety features from the larger Mercedes model ranges are also available for the A-Class for the first time, including Pre-Safe and Distronic Plus, as well as the blind spot, lane keeping and speed limit assistants. The sophisticated chassis design chassis design guarantees high active safety and previously unheard-of handling characteristics.

The most dynamic version in the lineup is the A-Class Sport engineered by AMG, on which the visual relationship to the Concept A-CLASS is evident thanks to the new diamond grille. This AMG version is going to become an instant hit among those who crave spending too much money for small, fast cars.