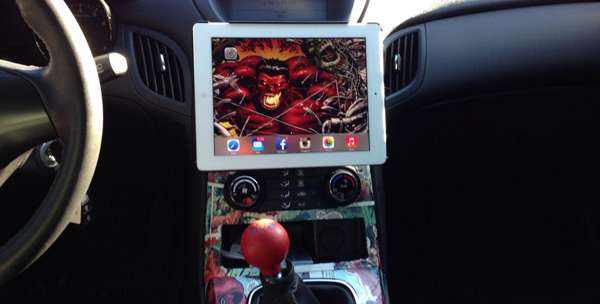 The Hyundai Genesis Coupe is a great vehicle for customizing with exhausts, spoilers and other mechanical goodies but some folks have taken customization to an extreme by adding interior items like iPads, laptops, and even holsters for their sidearms to their coupes.
Advertisement

Let's look at the latter one first. A recent post on the Hyundai Genesis Coupe Facebook page was from a proud owner demonstrating how he had mounted his sidearm to the right of and below his engine start/stop button. Needless to say, that prompted a lot of comments from his fellow Genesis Coupe owners.

The first wondered if it was legal – and the poster said it was. (Check with your state authorities to make sure you follow the letter of the law.) Lots of good advice followed, including always declaring you are in possession of a firearm when pulled over by the police.

Why install a firearm in your car? In this case, the owner said, "I was in a situation the other night where I needed mine and it had slid off the seat to the back passenger side floorboard. No more of that now."

He offers practical advice, too, on installing the bracket to hold his weapon. "I pulled the center dash out and put a plate behind the bracket that I made so that it wasn't just drilled into the plastic. Its a solid set up and doesn't get in the way, this is basically what I started with. I removed the bracket with the belt loop on it and made my own so I could bend it so it wouldn't be in the way."

Some posters suggested a steering wheel holster instead – and yes that's a real thing. Just head over to the GunGoddess.com website to see a photo but be forewarned. The site only sells you the mounting. The holster is sold separately but odds are pretty good a site like GunGoddess.com could probably sell you a holster as well.

Others choose to keep their firearms in their center consoles. Some owners, to comply with state laws, keep their weapons on their passenger seats so they comply with open carry laws in their jurisdiction.

How about an iPad handy while you drive the Genesis Coupe? An owner named Brandon Fleming did just that. As he explained on the Hyundai Genesis Coupe Facebook page, "It's a hard shell back attached to the console, with the radio mounted back into the dash so iPad sits flush to the bezel." (See his photo accompanying this article.)

He mounted his iPad so it sits above his HVAC controls and it coordinates well with his manual shifter. You have to love his creativity and practicality. One poster said, "LOL this is a break-in waiting to happen." Fleming is prepared for that. "The iPad pops out of the case I wouldn't leave it anywhere lol," he replied. As one poster pointed out, he can always slide it under the seat when he's out of the car.

Keep in mind that federal law does prohibit playing moving images that can be viewed in the front seat while driving. (That's why DVDs don’t play on a front-seat screen except when the transmission is in a park in dealer or factory installed DVD players.)

Also, an iPad installed like this one could lead to distracted driving problems just like reading a text on your smartphone while driving. It's a cool thing to have an iPad there but use it responsibly.

Finally, what do you think about installing a MacPro over your front passenger footwell? To me, it looks like something out of a police cruiser but one Gen Coupe owner did just that.

Of course, this one was just satire poking fun at the folks who install tablets in their Genesis Coupes and the like. Then again, I hope it was satire. I don't think people would really install a 21-inch screen in their cars.

But in this day and age, no idea is truly unthinkable. What's the weirdest thing you ever saw installed in the interior of a car? It doesn't have to be just a Hyundai Genesis Coupe. All input is welcome! Use the comments section below.