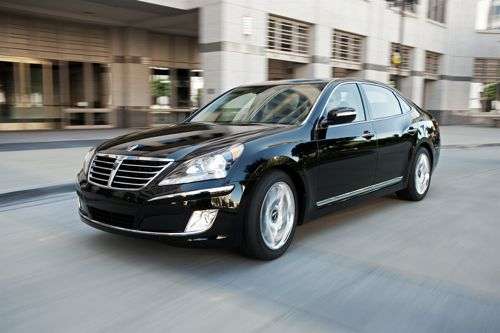 Hyundai Equus Has Staggering Advantage Over Competition in Important Areas

The 2012 Hyundai Equus is coming out on top with a staggering advantage over its competition according to info provided at a media launch of the refreshed model in Las Vegas.
Advertisement

At breakfast this morning, Hyundai Motors America president and CEO John Krafcik was proudly extolling the virtues of his rear-wheel drive luxury sedan that has easily exceeded expectations in its first year of sales in the U.S. Its 2011 calendar year sales objective was 2000 and final sales were 3193. He also bragged about Equus owners having better FICO, or credit, scores than Mercedes S550 buyers. Don't worry. Both are great at 753 and 745 respectively if memory serves correctly.

Of course, it should also be pointed out that the Equus pool is smaller than the other luxury brands with only a 5.7 percent segment share in 2011. That number is smaller but not insignificant.

A stunning accomplishment of the Equus is its residual value as determined by Automotive Leasing Guide (ALG). Its 3-year residual value is 47 percent compared to 46 percent for the Lexus LS 460. The BMW 750i and the Mercedes-Benz S550 are both tied at 42 percent while the Audi A8 is rated at 40 percent.

Other key Equus facts as outlined by Hyundai are:
• JD Power APEAL top scoring model of 2011
• Top safety pick from the Insurance Institute for Highway Safety
• 67% of Equus buyers are new to Hyundai (what are called conquest buyers)
• Only luxury model to offer exclusive service valet program.

Maybe the advantage isn’t staggering in all areas but there are some other interesting facts about the 2012 model year Equus. The new V8 engine offers all of the premium engine technology from the 4.6-liter V8, including Dual Continuously Variable Valve Timing (D-CVVT), a tuned variable induction system, and low-friction diamond-like coatings (DLC) on piston skirts, rings and tappets. Even with these power increases, fuel economy is estimated at 15 mpg city, 23 mpg highway and 18 mpg combined. The new transmission adds two additional ratios to enhance acceleration, shifting smoothness, and transmission efficiency by more than six percent compared to last year’s six-speed.