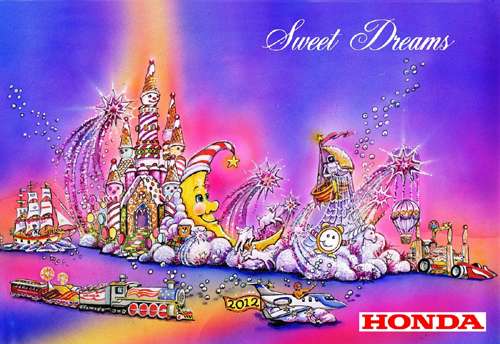 Try as it might, lately Honda has not been able to wow the general car buying public with its automotive design. Maybe it should borrow a cue from its 2012 Rose Bowl Parade float for something people will notice to overcome its design woes.
Advertisement

If only the company would implement the power of dreams on products like the Honda Fit EV that will be the parade’s official pace car. About the only inspiring design touch for the 2013 Honda Fit EV is its wide, white smile on the front fascia that gives it a whimsical air and sets it apart from the standard Honda Fit.

Parade watchers will witness a 55-foot-long vision of a child’s dreamlike imagination in which anything is possible. Sheep jump over a smiling crescent moon under a fanciful starry sky, leading to dreams of candy and gingerbread castles, hot air balloons, unicorns and a favorite teddy bear.

In an encore performance, replicas of three past award-winning Honda floats are represented: a dreamy race car (“The Power of Dreams,” 2003), the longest float in Rose Parade history (“Families across America,” 2005) and a fanciful sailing ship that pays tribute to Honda’s philanthropic activity (“Ship of Dreams,” 2010). The float also looks to the future with replicas of Honda’s innovative products and technologies – the HondaJet – and ASIMO, the world’s most advanced humanoid robot.

In a parade first, the replicas of the HondaJet, “Families across America” and “Ship of Dreams” will be satellite units ranging from 13-feet-long to 26-feet-long propelled by Honda ATVs that will move independently of the main float unit. For the second straight year, Honda’s main float will be propelled by a specially configured hybrid, low-emission engine to help the float function more efficiently and reduce its carbon footprint. Now that's what we're talking about – a design first. It's our lament that Honda can't come up with design firsts for its automotive products and think outside the box.

The Honda float and satellite units include a variety of flowers, plants and seeds that will later be ground up for mulch after the parade activities are concluded. (Honda announced no plans to produce ethanol from the flowery remains.) For you fans of gardening, some of the flowers that will be used include white mums, white orchids, white roses, white everlasting, strawflower, lavender mums and roses, and blue irises combined with cotton, pampas grass, blue statice and orange lentil seeds.

Honda first collaborated with the Tournament of Roses in 1961 to provide two-wheeled vehicles for 1962 Parade operations. Honda has been a float participant in the Rose Parade since 1977 and has also served as the official Tournament of Roses vehicle since 1994. As presenting sponsor, the Honda float will lead the Parade and introduce the theme every year. It will not be a commercial entry and will not be part of the judging process. Prior to becoming presenting sponsor in 2011, Honda floats won awards 15 of the previous 16 years.

Honda does not credit the designers of the float in its official announcement. Maybe the company should consider move the Rose Bowl Parade float designers to the automotive side to spark some inspiration. The company's design woes are starting to make the company look dated when matched against its domestic and Korean competitors. Fortunately, Toyota is largely continuing its march to blandness.