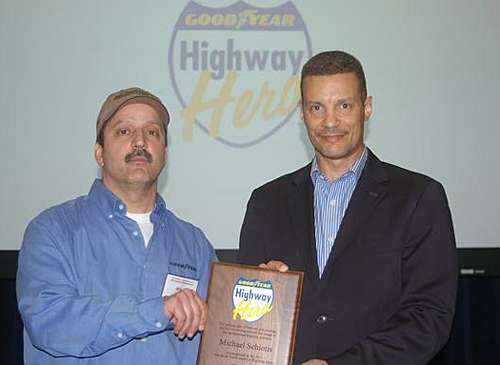 Mike Schiotis of Spring Hill, Tenn., has been named the 2011 Goodyear North North America Highway Hero for saving a woman from a gun wielding attacker. The presentation was made during the Mid-America Trucking Show, which is taking place this week in Louisville, Ky.
Advertisement

According to a release from Goodyear, Schiotis, who works for Seville, Ohio-based Panther Expedited Services Inc., was driving to his destination in Pennsylvania on Nov. 1, 2011, when he saw a woman walking with a man close behind her. Thinking they were injured, he slowed down and noticed that the man was pointing a gun at the woman.

The brave truck driver did something most of wouldn't do. He got involved without concern for his own personal safety.

Schiotis stopped his truck and the woman began pounding on his door, screaming "Help me! He's going to kill me!" Schiotis jumped out of his truck and positioned himself between the woman, who was bleeding from the head, and her assailant. He helped the woman into his rig and decided to take her to the next truck stop.

The gun-carrying man got back in his car and began to follow Schiotis' truck. Schiotis pulled into a truck stop, but decided it was safer to continue down the highway. Meanwhile, he notified the Pennsylvania State Highway Patrol, then used his CB radio to tell other truckers in the area about what was transpiring.

Another truck driver, who was behind Schiotis' 18-wheeler, heard him and took action. Together, they drove side-by-side, weaving back and forth to prevent the gunman from closing in on Schiotis' tractor. This gave troopers time to catch up with the man and apprehend him.

For his heroics, Schiotis (pictured above accepting an award from Mark Pillow, director of business solutions, Goodyear Commercial Tire Systems, received an undisclosed cash award, a special ring, and the plaque he is shown holding.

"We are grateful to Mike Schiotis for his quick thinking and brave actions," said Phillip Kane, vice president of Goodyear Commercial Tire Systems. "He literally put himself 'in the line of fire,' and in all probability, prevented a tragedy from taking place. Mike's decision to interject himself into this dangerous situation is a powerful example of the selflessness and professionalism exhibited by many of today's professional truck drivers. Because of his action, a life was saved. For this, Mike Schiotis has earned the right to be called a hero."

Schiotis and three other truck drivers were selected as finalists for the 2011 North America Highway Hero Award. Other finalists included:
• John Crozman of Black Hawk, S.D., a driver for Long Haul Trucking in Albertville, Minn . While driving down a rest stop access road near Summit, S.D., on Feb. 3, 2011, in the middle of a severe snowstorm, Crozman noticed a candle flickering inside a car that was parked on the side of the highway. Fighting sub-zero winds, Crozman walked to the car and found an elderly couple inside. Ill-equipped for the dangerous weather, they had been trapped in the car for more than four hours. Crozman led the shivering man and woman to his truck and let them spend the night in his warm sleeper cab. The next day, he made sure they were safe and their car was rescued before continuing along his route.

• Melville Farnell of Shelburne, Ontario, a driver for Tupling Farms Produce Inc., also based in Shelburne. Farnell was making a delivery on May 13, 2011, when a car that was traveling in the opposite direction veered into the path of his truck and slammed into it head-on. The impact caused Farnell's tractor-trailer to jack knife. Diesel fuel began leaking onto the highway. Though shaken, Farnell approached the car, which had come to stop in a ditch. He observed a semi-conscious male in the driver's seat. Farnell broke the driver's side window and pulled the much heavier motorist to safety just minutes before the car exploded.

• John Neumeier of Russia, Ohio, a driver for Bohman Trucking, also based in Russia. Neumeier was loading his milk delivery truck around 9 p.m. on Nov. 14, 2011, when a car driving down a nearby road missed a curve and plunged into an eight-foot-deep pond. As the car began to sink, Neumeier spotted the driver's cell phone light. Knowing he had little time to waste, he grabbed a large wrench, dove into the pond, and beat on the driver's side window until it broke. Neumeier pulled the driver, a 65-year-old man, out by his feet and hauled him to shore. The man was taken away by ambulance.

Founded by Goodyear in 1983, the Highway Hero program honors professional truck drivers for the often unnoticed rescues and roadside assistance they provide as their jobs take them across the United States and Canada.