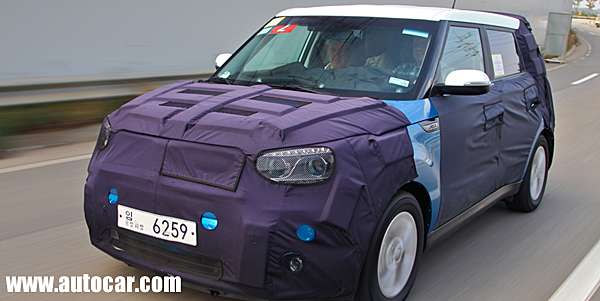 Well that didn't take long as the same day that Kia announces its new 2014 Kia Soul EV, a review is posted and it looks like it "has potential." While it still seems like the Soul EV is not ready for the U.S., it won't fail because of internal design but it might because of a glaring exterior design problem.
Advertisement

Matt Burr, writing for England's AutoCar.com, got behind the wheel of the 2014 Kia Soul EV in Namyang, South Korea, and proclaimed the Korean automaker's first global electric vehicle "has much potential." (Kia currently has a Korean domestic market EV called the Ray.)

In an earlier piece for TorqueNews.com, "Kia Jumps Too Quickly on EV Bandwagon with Soul EV," I observed, "The Soul EV should have stayed in Korea until the U.S. and other markets are more willing to embrace them. Apathy is continuing to kill the electric vehicle in this market (sadly) and not just GM."

One risky move Kia is taking with the Soul EV, according to Burr's review, is it won't be largely distinguishable from the internal combustion engine Kia Soul from the outside. It appears the interior may not be all that different either. He wrote, "It has sharper, cleaner exterior styling than its predecessor and a more upmarket interior, albeit one that is more akin to the standard Soul than the futuristic … Nissan Leaf."

In my opinion, it's going to be at least five years (maybe 10) before electric vehicles can become commonplace in the U.S. market. Electric vehicles need to scream that they are different for the early adapters of the technology. After all, most owners enjoy a certain smugness from driving an electric vehicle at this point. They want people to know they're driving an EV right away.

Look at what Audi has done with its new lineup of diesels. It's emblazoned on the sides of the SUVs in big type: TDI. They want you to know a diesel vehicle has passed you on the highway.

Like other electric vehicles, there seems to be a focus on making a city car or at least suburban vehicle when it comes to driving characteristics. Burr opined, "It feels less at home on faster roads, where a lack of positive steering feel is evident and there’s surprisingly aggressive deceleration upon throttle lift off." So, at this point, it's not going to be much of a highway cruiser, which could be problematic for folks intimidated by its size but it does have a fairly healthy 124-mile range, which makes it a suitable highway vehicle in terms of driving over the hills to grandma's house.

Based on reading Burr's review, the problems the Kia Soul EV will have in the U.S. have little to do with its mechanical design. He said the vehicle's platform "was designed to accept battery packs under the rear seats, which means that little of the second-generation Soul’s [24.2 cubic trunk] space has been sacrificed for the EV technology. It does, however, bring a weight penalty in the region of [440 lbs.]." That's good news for folks who want function with their fuel economy – and yes, I'm aware an electric vehicle doesn't sip fuel.

Aaron Turpen wrote on November 12, 2013 - 11:25am Permalink
Five or ten years is optimistic. Twenty is more likely. I think there is a big market for EVs that aren't "set apart," though. Ford has the right idea with their Fusion and C-MAX line with all of them, no matter the powertrain choice, looking basically the same with only badging setting them apart. There's a strong market for "normal" cars and only a limited niche market for "weird" ones. Besides, the Kia EV will just be another CARB compliance car anyway.