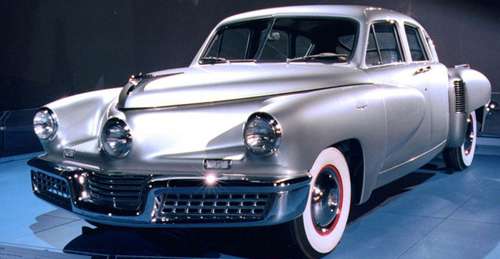 The Smithsonian Institution, or as some lovingly call it “America’s Attic,” has put out the call to classic car fans to vote on an exhibit called ‘Race to the Museum.” The winning cars will be out on display Jan. 22 to Feb. 21 at the National Museum of American History in Washington, D.C.
Advertisement

Roger White, Associate Curator of Road Transportation - Work & Industry at the National Museum of American History, Smithsonian Institution, answered some questions from TorqueNews.com about the voting that takes place through Jan. 11. Complete details are available at the Race for the Museum blog. It’s worth checking out the blog just for the great photos of all the contenders.

Classic car fans can select two of the following models:

Q. What is Race to the Museum? Where did the idea come from?
A. Race to the Museum is an online initiative, in which, for the first time ever, the National Museum of American History is allowing the public to vote on which two vehicles will come to the museum in January and February. It is part of the museum’s outreach to increase visitation to the museum during a relatively quiet time in Washington.

Q. How are the winners going to be displayed? Will they be part of an exhibit?
A. The winners will be displayed outside the museum’s General Motors Hall of Transportation and the popular “America on the Move” exhibition on the first floor.

Q. The Smithsonian’s a big place. Why only 2 cars and why only on display for a month?
A. The National Museum of American History currently devotes 27,000 square feet – our largest exhibition in the museum – to the story of transportation in America. This initiative will bring in two additional vehicles and is part of a winter visitation initiative.

Q. What happens to the six that don’t make the cut? Are they going to be kept in storage or will they some day come out for a future exhibit?
A. The other cars will remain in storage, where they are preserved and available for research, media use, future exhibitions, and loans to other museums.

Q. The youngest car on the list is 14 years old. Are contemporary cars, well, too contemporary to be included? Were you only including cars not currently on the road or those driven in limited numbers?
A. The museum’s collection of automobiles includes 73 examples ranging from 1894 to 1997. A transportation collecting plan guides future acquisitions based on historical significance of automobiles from many eras.

Q. Tell us more about the 1948 Tucker Sedan that was forfeited in a drug arrest. How did the Smithsonian end up with this classic? Did you have to buy it? Are there other vehicles in your collection that are the result of ill-gotten gains like this Tucker?
A. The U. S. Marshals Service normally sells material goods seized in drug arrests and deposits the money in the U. S. Treasury. In this case, the Marshals Service decided that transferring this historical treasure to the National Museum of American History (at no cost) would benefit the American people more than cash assets.

Q. You probably get asked this question a lot. If you could drive just one of the 73 vehicles home from the Smithsonian’s collection, which one would it be?
A. It’s a privilege to be the custodian of these vehicles for the American people. I actually don’t fantasize about owning any of them, nor do I have a favorite vehicle. Each one represents tremendous learning opportunities through observation and research.